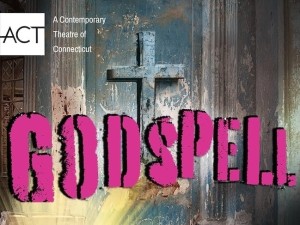 Prepare ye for the timeless tale of friendship, loyalty and love based on the Gospel According to St. Matthew.

I’m admittedly not a religious person, but if there was ever a time I’d considered it, it would have to have been as I sat entranced by A Contemporary Theatre of Connecticut’s (ACT) recent production of Godspell. I’ve not had the opportunity to experience the musical in any incarnation prior to this, but I am continually amazed by the work of Director Daniel C. Levine (he is also ACT’s Artistic Director), who, with permission from Broadway icon and original composer and lyricist Stephen Schwartz, conceived an entirely new spin on the yarn which speaks to our social, political, cultural, and even “pop” cultural times. It is hauntingly beautiful, and I alternated between swiping at my eyes and brushing the chill from my goosebump-flecked skin.

Despite never seeing Godspell (I know, how is that possible?) which was conceived and originally directed by John-Michael Tebelak, I could sing along, in my head of course, with several songs, most notably, “Day by Day.” It was also wonderful to see some familiar faces on stage from ACT’s previous productions, in addition to some vibrant new faces and many talented youth from the local area and beyond. A true ensemble cast, this production is filled with double and triple threats who make it look easy to put together a dynamic piece such as this. They hit all the right notes, and from costumes to set design to staging and more, it’s a true work of performance artistry. 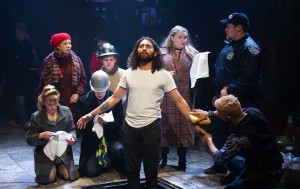 Levine’s update begins right at curtain, when a ragtag bunch of homeless street urchins scurry inside a dilapidated, abandoned church. It’s dark and it’s dank and just a tad bit creepy; a place where one might expect to feel an overwhelming sense of gloominess and despondency. But once assembled and the group determines the coast is clear, an infectious air of lightness and brightness permeates both the church and the theatre, inasmuch as what is truly important just happens to be right there on the stage. What these individuals all mean to each other carries far more weight than any material possessions – life, love, and a sense of community. That is until, like a tornado, a sudden onslaught of capitalism, greed, and an overall disregard for humanity sweeps in, in the form of a loud-mouthed, brash gaggle of real estate developers who feverishly plan to level the old church and turn the property into million-dollar-plus condos. It’ll take some divine intervention to prevent it – but you guessed it. Jesus plans to teach them a lesson or two.

In an instant, the church is restored to its majestic beauty (major kudos to Reid Thompson’s scenic design) and the chic, designer-dud wearing group is transformed into a funky, oddball bunch (shout-out to Brenda Phelps’ costume design) who slowly but surely become enraptured by Jesus and his parables which are continually thread throughout the two acts. The urchins, mainly children, watch it all from above. Soon the ill-mannered group begins to acquire the values of tolerance, compassion, and kindness – core lessons every one of us should learn. They, through the love of Jesus, come to accept the error of their ways. With this exceptional cast, and most notably the mesmerizing Trent Saunders as Jesus, it is impossible to resist being drawn in and feeling all the same feels, nor would you want to.

For a few delightful hours filled with a tremendous amount of love and heart, a whole lotta positive energy, and just enough religion and spirituality for good measure, ACT’s Godspell is not to be missed.

There is no way that this review will not date me. Yes, I remember seeing Godspell and Jesus Christ Superstar in the seventies. I also remember seeing the 1973 film version of Godspell. Both productions were directed at dwindling religious congregations, general apathy, and a youth movement which rejected mainstream institutions (trust no one over thirty), the least of which was organized religion. In my humble opinion, Godspell, even more so than its oft-compared, more traditional competitor, Jesus Christ Superstar, spun an incredible historical web that captured countless rebels with and without causes, returning them to the fold by breaking down the rigid parameters that existed at the time (and, to an extent, still do) in mainstream Christianity. Portraying Jesus, the Son of God, as a hippie-ish, almost clown-like figure was, to say the least, sui generis.

So, it was with great anticipation that I went to see A Contemporary Theatre of Connecticut (ACT)’s version of Godspell. My biggest question regarding the new play was whether it would it still be as entertaining and yet as impactful as it was back in the seventies.

I am thrilled to say that it is both entertaining and socially relevant and, in many ways, more relatable to modern audiences than it was in its heyday.

The musical was conceived and originally directed by John-Michael Tebelak with music and lyrics by Stephen Schwartz. In this instance, Schwartz not only permitted certain changes and updates to be made but provided new lyrics as well. In many ways, it was like seeing a totally revised production – a rarity in theatre where the playwright’s words are usually cast in stone and it takes a squad of lawyers to change anything. For me, it was like slipping on a familiar and favorite article of jewelry, but having it sparkle and shine like new.

Daniel C. Levine does an excellent job of directing (and conceiving) this newer version. The setting – an old church – and children who are on stage throughout the production (serving more as “witnesses” to the action rather than an Ensemble), are some of the innovations that add to the overall reverent atmosphere of the play. In spite of this, there is still the underlying demystification of traditional ritualistic religious dogma and the breaking of barriers between antiquity and modernity. It is no accident that the dead and ruined church comes alive with music and life once Jesus appears – an excellent symbolic conceit to open the play. 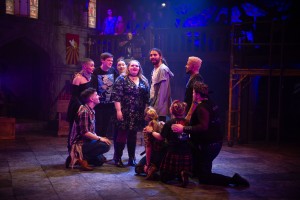 The fact that the play itself is based on the parables contained in the Gospel of Saint Matthew (as opposed to the pontification of straight religious dogma) facilitates a broader appeal of the story to a wider audience rather than simply confining it to devout Christians. Indeed, the parables are like Aesop’s Fables, engaging stories that have a moral point and are applicable to everyone. While all of the parables are dramatically and adeptly played before the children as plays-within-plays, two of the stronger parables for me for their relevance and universality are the “Turn the other cheek” and the “Let he/she without sin cast the first stone on an adulteress.” Having the children on stage watch and presumably learn from the messages of the parables is a conceit that underscores the pedagogical aspects of the play. It is like going to Sunday school mass in your own backyard.

Kudos must go out to the entire cast. Trent Saunders has a commanding presence and is a spot-on Jesus with just the right mix of a traditional “look” and the Godspell infusion of an everyman persona. He is not hippie-ish nor clownish like in other performances, but instead a real person. He has great chemistry with Jaime Cepero who plays John the Baptist and Judas. The rest of the cast are all triple threats and it would be remiss not to mention them: Katie Ladner (Katie); Shaylen Harger (Shaylen); Jacob Hoffman (Jacob); Alex Lugo (Alex); Andrew Poston (Andrew); Phil Sloves (Phil); Monica Ramirez (Monica); Morgan Billings Smith (Morgan); Emma Tattenbaum-Fine (Emma).

Finally, there are the iconic music and lyrics of Schwartz. Ladner and the rest of the company’s version of “Day by Day” gave me an earworm that has continued for days and I’ve been singing it non-stop (much to the chagrin of wife and co-reviewer mainly because I cannot carry a tune and screw up all the lyrics).