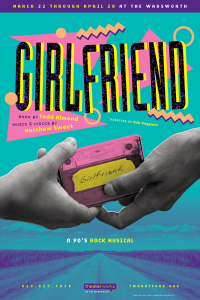 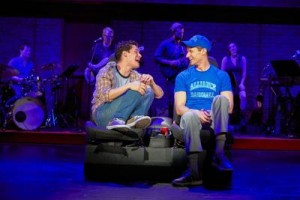 Girlfriend is a satisfying, nostalgic, coming-of-age of tale between that purgatory often known as the gap between high school and college. If truth be told, the story (from a book by Todd Almond) is derivative to say the least, where boy meets girl, boy loses girl, then boy finds girl again, the salient difference being is that it is a boy-meets-boy story. Set in Nebraska in 1993, there is the underlying stigma and prejudice of gay relationships, particularly where one young man has been in the closet through most of his high school years paying lip service to the social constructs and schemas at that time – although I must admit that even in 1993 the winds of change regarding one’s sexual preference was firmly embedded in pop culture including the theatre and movies and television.

Despite its predictability and lack of surprises, the acting is wonderfully on point. Both David Merino (Will) and CJ Pawlikowski (Mike) are perfectly cast as the star-crossed lovers. Their chemistry is palpable as they play off each other’s characters. The music is perfectly in line with what’s happening on stage thanks to Matthew Sweet’s music and lyrics.

Last but not least, the play highlights the dichotomous talent for Rob Ruggiero’s ability to direct both musicals and dramas, certainly not an ambidextrous quality to which many directors can aspire.

Girlfriend is a light piece of enjoyable theatre. For me, it stops short of the heavy issues of prejudice, peer pressure, bullying, and parental acceptance and rejection of a child’s sexual preference and lifestyle; these all lie beneath the surface of the action but never come fully into their own as solid motifs or themes or thought-provoking after-show rumination.

Adolescence is jam-packed with countless changes: physical, cognitive, psychological, and social. For better or for worse, teens will experience a new intensity of emotions; the push and pull between family and friends; an increasing need for peer approval; heightened self-awareness and self-consciousness; and thoughts (or even feelings of panic) about the future…and the list goes on. Top that with an ever-growing interest in and pursuit of romantic relationships, and it all can become a robust cocktail for daily and pervasive angst and torment. Does he/she like me? Does she/he think I’m attractive? Will I ever have a boyfriend/girlfriend?

For Nebraska boys Will and Mike whom we come to know in Todd Almond and Matthew Sweet’s Girlfriend, it’s moments after graduation and they’re now embarking on that blink-of-an-eye summer that exists between high school and the rest of their lives. But for these two, they’ve got even more on their plates. It’s 1993 and figuring out who you are in a rural state before many LGBTQ discrimination laws have been passed and social awareness and acceptance is still more than a bit lacking, is perhaps exceptionally challenging. Vastly different in some ways, Will is the flamboyant one; everyone in school knows he’s gay and he couldn’t hide it if he tried. Mike, on the other hand, is the good-looking jock with a girlfriend as his beard for both his teammates and his parents. He’s somehow managed to get all the way to this point without anyone yanking him out of the proverbial closet.

But life is a roller coaster of experiences and emotions, filled with delight, discomfort, and heaps of doubt. How will these young men figure it all out? Who will they be and what will they find once they get to the end of the ride?

None of us know where life will take us. Despite the fact that Will and Mike must tackle social backlash as a result of their sexuality, their paths are filled with many of the same uncertainties we all face. Their journey is both relatable and authentic, rife with laugh-out-loud moments as well as tearful ones. As an added bonus, Girlfriend does it all to Matthew Sweet’s seminal album, disguised as a gifted mixtape.

Directed by the inimitable Rob Ruggiero, Producing Artistic Director of Hartford’s TheaterWorks, he couldn’t have asked for a more talented duo. David Merino as Will perfectly captures the character’s charm and humorous defenses he’s been using to navigate the challenges of being an openly gay high school student in the nineties. He nails the Mack Truck-like nerves of teen crushes and unrequited love. CJ Pawlikowski as Mike is exceptional in so many ways – he’s self-possessed yet insecure; he has both swagger and hesitancy; and when he picks up the guitar, he’s got a voice for days. Merino and Pawlikowski also have the kind of on-stage chemistry one cannot manufacture and that every director yearns to find.

With a minimal yet spot-on set design by Brian Prather, the characters and their experiences shine at the forefront. Musical accompaniment is provided in the background by the exceptional on-stage band: Evan Zavada as Conductor and on keys and vocals; Billy Bivona on guitar 1; Julia Packer on guitar 2 and on vocals; Adam Clark on bass and vocals; and Elliot Wallace on drums.

Girlfriend is a coming-of-age tale and one we’ve likely seen and encountered ourselves time and again, but it’s packaged here in an endearing and affecting way. For a bit of nostalgia, a lot of tugs at the heartstrings, and a brand-new experience for many TheaterWorks devotees at their temporary home at the Wadsworth, see it before it’s disappears just like that fleeting post-high school summer