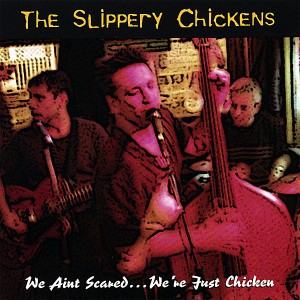 Get Your Head in the Game
The Slippery Chickens

In a word, fun. Let’s make that capital FUN! This is a fun band, with fun songs.

When I hear this CD I get a vision in my head. I imagine a couple of mics strategically placed around the room and a guy sitting there with headphones on plugged into a mixing board with three giant knobs on it and a reel-to-reel tape recorder spinning tape. The band is sweating it out making every note count and enjoying every second of it. The room smells of hot tubes from the amps. The Slippery Chickens did in fact record this CD in a garage – a lot of it is live and it sounds it. And I don’t mean that in a bad way either. There are many bands and songs that that would fail miserably with this approach but this band is perfect for it. Musically they remind me of what now seems like the innocent beginnings of Rock & Roll. The music is steeped in old school rockabilly/surf music. Think Duane Eddy, Eddie Cochran, or even later – the Stray Cats. However, the lyrics are where The Chickens shine for me. Quirky, silly and sometimes a tad naughty. You can tell they are fully enjoying their tongue-in-cheek approach to their music.

The musicians consist of Jerry Scaringe on bass and vocals, Mike Olivieri on guitar and “sometimes drums,” George Moralas on “other times drums,” Matt Mousseua on “here and there drums,” Gary Schwartz on “we should add another drummer to the band drums,” David McDowell on sax, and special guests Jim Scaringe on sleigh bells and souse tuba and Dynomite Di Cricchio on BG vocals. They all do what they do very well and mesh together perfectly. I love the low-fi approach and the way they pull off the concept of less is more. The only effect I hear is reverb! They are living proof that you do not need pro tools and hundreds of plug-ins and edits to make great music! Well done lads. Well done!