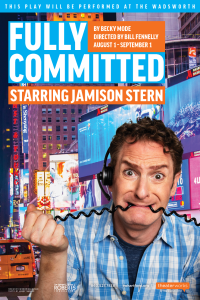 I’ve worn many hats in my life and in them I’ve invariably enjoyed what it was that I was doing. For about ten of those years, to provide myself with spending money through college and then pay the bills while in grad school and beyond, I worked in several restaurants. Despite what many may think, food service is not a place for the faint of heart. It is a job where you’ve always got to be “on” in an often frenetic, entirely stressful, yet mostly rewarding sort of way (at least financially). And I’ve always found the similarities between the restaurant business and show business to be quite surprising at times.

All that being said, that’s precisely why I found TheaterWorks Hartford’s newest production of Fully Committed by playwright Becky Mode and directed by Bill Fennelly to be so downright incredible. The marriage of these two businesses – where there are so very many moving parts and just one small failure can take down the whole operation; where the person in charge (the chef or the director) can literally make you or break you; and where only the best of the best survive, in great part because your critics are your audience – is true perfection. 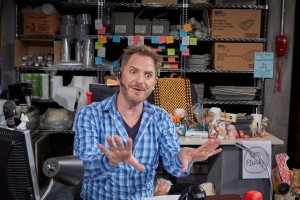 This is not the first production I’ve seen about the restaurant business (Pump Boys and Dinettes and The Most Beautiful Room in New York to name a few), but it is the first in which I had the distinct pleasure of seeing the incredible Jamison Stern man (or woman as the case may be) things all on his own. You see, Stern, whom I’ve seen before at TheaterWorks in The Legend of Georgia McBride, is a force to be reckoned with – and in Fully Committed, he fully commits to 33 different characters in this hysterical, 90-minute, manic romp. In Fennelly’s director’s notes, he equates the show and Stern’s performance to that of a circus clown. I’d even go so far as to call Stern a magician, because I still have yet to figure out how he pulled it off.

Stern’s main “personality,” if you will, is Sam, an ever-auditioning, struggling actor who’s found himself, where else, but in a restaurant trying to pay the bills. But instead of donning a server’s apron as so many out-of-work actors do, he’s deep in the bowels of the establishment, answering phones and taking reservations for the elite who are willing to spend $250 or more per person at NYC’s top, top, top gastronomic eatery (where they may just be plating meals garnished with dirt).

Like a quick-change artist, or more accurately, like lightning, Stern morphs into everyone from Gwyneth Paltrow’s saccharine assistant who calls repeatedly to remind Sam about such things as Ms. Paltrow’s needs for a low wattage bulb over her table (which her staff will be happy to change themselves) and an all-male waitstaff; to the narcissistic bulldog of a chef who only calls on the red phone with the loud buzzer and the flashing red light; to the snooty maître d’; to Sam’s MIA supervisor who may or may not be stuck on the L.I.E. All the while, Sam’s also dealing with his own personal issues on a cell phone that gets virtually no signal in the basement office, like his dismissive agent; his fake “friend” who keeps calling to rub it in about auditions he claims to have aced; to his needy dad who’s hoping Sam will be able to come for Christmas.

The dizzying hour and a half truly flies by. Rife with digs to both the entertainment business and the restaurant world, it had me laughing out loud. And I don’t think it’s just because I have experience in both areas – if the guffaws filling the air were any indication, it’s clear that the rest of the packed theater felt the same way. 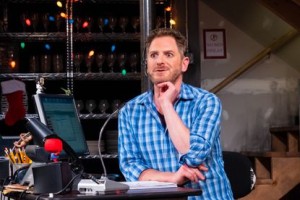 Stern is masterful and perfectly cast. In a role originated on Broadway by Jesse Tyler Ferguson (many know him from TV’s Modern Family but I also had the total pleasure of seeing him Off-Broadway in Log Cabin), I can say undoubtedly, Stern completely rises to the occasion. Fennelly’s direction is spot-on as is Brian Prather’s impeccably detailed set design. Kudos also to John Lasiter for lighting design; to Frederick Kennedy for sound design; to Bridget Sullivan as Production Manager; to Kate J. Cudworth as Stage Manager; and to Bob Davis as Dialect Coach.

Like a meal you don’t want to let get cold, rush to the box office and get your tickets while they’re hot. Fully Committed is fantastic fun and like always, TheaterWorks has plated up perfection yet again!

If I’ve said it once, I’ve said it a thousand times, one-person shows are nearly impossible to pull off successfully. Sure, in the old days, I could watch Hal Holbrook suck every nuance out of his Mark Twain character by twiddling his cigar for five minutes. Larry Luckinbill was also able to do it in Lyndon back in the early 90s. But times were different; we weren’t talking about a post-MTV era where today’s audience has the attention span of not much more than about six seconds.

Needless to say, I was a bit trepidatious when I heard TheaterWorks Hartford was going to do a one- person show. Had the runner (Artistic Director Rob Ruggiero) finally stumbled? The production notes tout Fully Committed starring Jamison Stern as “tour de force performance.” Mr. Stern commits himself to playing somewhere in the neighborhood of thirty-three characters in under 90 minutes – a herculean feat at best. Bill Fennelly, the director, also compares Jamison to a circus clown. With all due respect, not particularly a great analogy today thanks to Stephen King and a plethora of other horror writers who have given coulrophobia (clown phobia) to the masses including myself. What this play needed was an actor like Robin Williams on steroids.

Fortunately, Jamison Stern fits the bill perfectly. He is simply fantastic and his performance, as advertised, is a true tour de force. Ruggiero’s record of bringing great theatre to Connecticut remains unbroken and Fennelly has a great addition to an already prestigious resume. Jamison is incredibly fluid and adept at changing characters literally on the spot. In so doing, he not only somehow keeps the characters in perfect sync but is side-splittingly funny from start to end.

The plot is elegantly simple. Sam (Stern) is the Assistant Booking Agent at one of those shi-shi restaurants (probably with its own reality show) where the food sounds positively atrocious but you have to make a reservation three months in advance. Sam is only working at the restaurant for the money as his real ambition is acting. On this particular day, Sam is by himself in the bowels of the restaurant’s not so shi-shi basement, handling one call after another. The main booking agent is MIA at a Bed Bath and Beyond interview and poor Sam cannot even take time to eat lunch (although the fascist Chef does give him a mandatory bathroom break to clean up a customer’s mess). Poor Sam has to deal with an army of sycophants (and probably one or two sociopaths) who cajole, beg, plead, bargain, negotiate, and ultimately bribe Sam for reservations. There also is a salient subplot involving Sam’s ability to get off work to see his father and the rest of his family for the holidays.

The play itself is hilarious, witty, charming and, I am fairly certain, somewhat realistic. My only concern is the take-away messages of the play especially in this day and age (the play was originally developed in 1998). Without giving away too much, are accepting bribes to get ahead in business rather than hard (and sometimes unrewarded) work really the kind of messages we want to advocate and propound to modern audiences? You’ll have to see the play and sample its offering to decide for yourself.