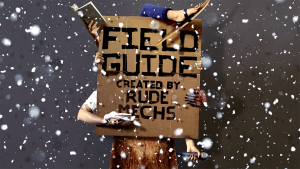 Once in a blue moon a show comes along that forces me to think. Really hard. You know, outside the proverbial box. I scratch my head, shake my head, even smack my head, all in an effort to bring to consciousness an understanding that had somehow been eluding me. Don’t get me wrong – I like to think. I consider myself an intellectual and a creative. I enjoy culture as well as deep exploration of the human condition. So it is with all of this in mind that I find myself struggling a bit with the nearly impossible task of writing a review for Yale Repertory Theatre’s newest commissioned production, Field Guide. 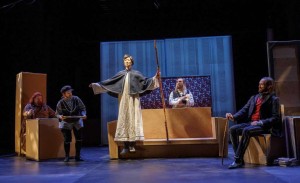 Field Guide was created by an ensemble-based theatre collective from Austin, TX known as the Rude Mechs, and is loosely based upon the philosophical novel The Brothers Karamazov by Fyodor Dostoevsky. Just a quick perusal of their website will tell you that what you’re getting from them isn’t in any way traditional theatre. Since 1995 the Rude Mechs have been presenting a “genre-averse slate of original theatrical productions peppered with big ideas, cheap laughs, and dizzying spectacle. What these works hold in common are the use of play to make performance, the use of theaters as meeting places for audiences and artists, and the use of humor as a tool for intellectual investigation.” Field Guide was no exception.

Maybe I should have read The Brothers Karamazov first – or at least the SparkNotes or Wikipedia – because I can say that all those neurons firing haphazardly in my brain left me spinning and after the production was over I wasn’t certain whether I had been placed in an induced dream state or if I was just coming out of one. You know what it’s like when you’re in that post-sleep, hypnopompic state where you’re trying to piece it all together after some zany dream. You ask yourself, Where am I? and What the hell just happened? I can actually report that after Field Guide ended, while collecting their belongings to exit the theatre, there were audience members who did in fact state the latter out loud.

I can equate my experience with Field Guide to that of a wildly improbable reverie. A very Freudian one with all of the symbolic, spiritual, philosophical, and psychological elements with which Dr. Sigmund would indubitably have had a field day. What truly struck me is that just prior to sitting down to write this review, I actually learned that Freud loved The Brothers Karamazov, calling it “the most magnificent novel ever written,” and as no surprise, he was fascinated by the Oedipal themes in it, which illustrated the very concept he had woven into his famed psychoanalytic theory. 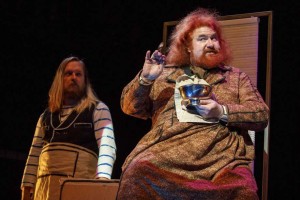 Two paragraphs later and now I’ll say more emphatically, I know I should have read the book first. I did just take a moment to skim many a synopsis online. In a far briefer, greatly experimental, and very unique presentation, the Rude Mechs brought many of the highlights of Dostoevsky’s novel to their production, punctuated by pop culture references and an abundance of other oddities. The godawful father of three sons, Fyodor, has nary a redeeming quality. The brothers, Alyosha, Ivan, and Dmitri along with half-brother, Smerdyakov, return to the homestead, each with their own agenda and many reasons to detest the patriarch. With conflicts over money, dying monks, hot tubs, love triangles, and roaming bears, we watch them (and the rest of the company) bumble around moving boxes (yes, I did say moving boxes) and stage-filling bouncy houses (yes, I also said bouncy houses) while dropping crude quips mixed with pithy dialogue. There’s a whole lot going on in Field Guide including stand-up comedy and dancing, and I would highly recommend waiting to have a drink until after the show so that you can stay as clear-headed as possible, lest you miss any one of the highly eclectic and very peculiar beats.

Shout-outs to a truly talented ensemble: Mari Akita as Alyosha, Lowell Bartholomee as Fyodor, Robert S. Fisher as Smerdyakov, Thomas Graves as Ivan, Hannah Kenah as Grigory, Katya, and Grushenka, and Lana Lesley as Dmitri. Two of my favorite moments were when the cast shuffled in from the house right theatre entrance clad in white parkas, one donning a clickety-clackety pair of snowshoes; the other was when Graves nearly broke up as he recited poetry while seated in a cardboard “hot tub.”

James Bundy, Artistic Director of Yale Repertory, said in his program notes that Field Guide will undoubtedly feel singular to you. As is with much experimental theatre, it attempts to create a more active relationship with its audience. It takes traditional theatre and stands it on its ear, delivering a distinctive experience, truly open to individual interpretation. I challenge you to take the trip to Yale in order to engage in Field Guide in your very own way.

And all this science I don’t understand it’s just my job five days a week. – Elton John, “Rocket Man” 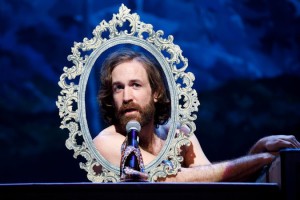 The premise for this review is the following, I want you to think I am intelligent, sophisticated, incisive, highbrow reviewer who can make cocktail chit-chat with the best of them. But despite these qualities, I just did not get this play. I tried really hard to understand at least most of what was going on (I was able to put Cloud 9 together), but alas, this one was just beyond my ken. If there was ever a talk back, dramaturg package, or a set of SparkNotes needed for a play’s understanding, this was it – at least, for me anyway.

The official description (as noted on Yale Repertory’s website) is the following:

“Strap on your snow shoes and join Rude Mechs on a surreal hike through one of the greatest—and longest!—novels ever written: The Brothers Karamazov. A physical meditation on Dostoevsky’s masterpiece, Field Guide enlists stand-up comedy, a dancing monk, and some old-school magic to explore faith, meaning, and morality.”

The above description sans The Brothers Karamazov could easily apply to any work by Kurt Vonnegut. You do not have to have read The Brothers Karamazov as elements of the original novel are interwoven through the surrealistic elements added to the play. (If truth be told, I was more of a Tolstoy fan.) And even if you were a die-hard Dostoevsky groupie, I am not sure it would have added to the meaning of the piece. 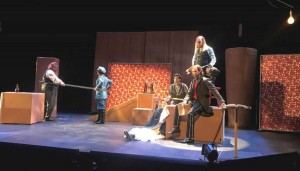 In many ways, the concept of Field Guide is reminiscent of Seth Ghrame-Smith’s modernized parodies Pride and Prejudice and Zombies and Abraham Lincoln: Vampire Killer. The recipe is to take a dead author whose work is in the public domain (in this case a dead foreign author whose estate resides in a non-capitalist country – so there is definitely no threat of copyright infringement) and make it relevant to a modern audience by overlaying it with satire, parody, and a boatload of pop cultural references. In the case of Field Guide, (spoiler alert) it was to take everything from talking bears (who also sh**t pages of half-digested literature on stage) to set piece ballets to a full-sale inflatable bouncing house and throw it to an audience and see what, if anything, resonates.

Don’t get me wrong. There are flashes of true creative genius in Field Guide as well as some brilliant dialogue and sporadic hilarity. The acting by the talented ensemble cast was solidly engaging, and for me, the best thing about the play. And I did get the underlying philosophical themes and the existential issues – life sometimes sucks and then you die and you may go to heaven or hell depending on whether you believe in God. While I understood all that, the gestalt didn’t gel for me.