Pillow Talking’s Review of EVERYTHING IS F*CKED 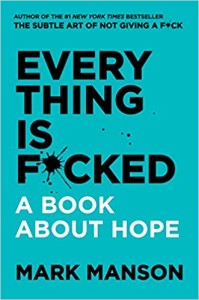 EVERYTHIMG IS F*CKED by Mark Manson

There I was, browsing in one of the still extant, brick-and-mortar Barnes & Noble stores, when I came across the book Everything Is F*cked: A Book About Hope. At times a contrarian by nature, the oxymoronic title still stopped me in my tracks. Then I noticed that the author was Mark Manson, blogger and best-selling writer of The Subtle Art of Not Giving A F*ck, a book which was the subject of a previous Pillow Talking review (see Pillow Talking’s review).

After I’d read the latter title, I’d ultimately decided that Manson’s book was worth giving a f*ck about and recommended it, despite the fact that his circuitous manner of getting to the point, and the colorful, if not completely inappropriate at times use of F-bombs and other “shock” references was, at the very least, distracting. Essentially, Manson makes a great argument in the beginning of The Subtle Art… that since we are merely dust in wind and the universe itself could care less about us, we should not give a f*ck about anything. Then, for the remaining 200 or so pages, he makes the case why there are certain things in life we should actually give a f*ck about. Okay, even though it was a bait-and-switch type of marketing and the book was very uneven, I found some useful tidbits not found in other books of the genre.

After reading the first couple of pages of his newest book, Manson had me hooked yet again. Everything Is F*cked was placed at the top of the “must read” books on my night table, going so far as to bump new novels by King and Koontz. As in his prior book, he makes a very compelling argument that everything in the world is f*cked, what he calls “The Uncomfortable Truth,” so why should we care about anything? Yet, in the next breath (or in this case, the next paragraph), he tells us that despite The Uncomfortable Truth, his new book is about hope. For these next 200 pages we are given reasons why there is hope in a hopeless world; but then he seems to do an abrupt U-turn in the last chapter relinquishing the notion that we should have hope other than to co-exist (or survive at all as a  species) in a Matrix-Terminator-esque future that will be run by A.I. machines. Indeed, Manson takes us from the dawn of time to the possible end of civilization. At certain points I felt like I was reading the non-fiction version of iconic sci-fi novel A Canticle for Leibowitz.

Manson definitely is at his best when he is writing mini-biographies about such luminaries as Nietzsche, Plato, Kant, and others. One may think that Manson has dumbed-down his philosophical discussions for the masses. Not so, as the book is laden with well-researched facts backed by tons of footnotes. In fact, some of the footnotes are critical and should be explained in the text rather than relegated to simply “Notes” at the very end after the “Acknowledgments.” For example, it would have been beneficial to know right up front what Manson means by his use of the term “hope” rather than in his second note:

I don’t use the word hope in this book in the way it is typically used academically. Most academics use “hope” to express a feeling of optimism: an expectation of or belief in the possibility of positive results. This definition is partial and limited. Optimism can feed hope, but it is not the same thing as hope. I can have no expectation for something better to happen, but I can still hope for it. And that hope can still give my life a sense of meaning and purpose despite all evidence to the contrary. No, by “hope,” I am referring to a motivation toward something perceived as valuable, what is sometimes described as “purpose” or “meaning” in the academic literature. As a result, for my discussions of hope, I’ll draw on research on motivation and value theory and, in many cases, try to fuse them together. (p. 237)

In sum, there are countless F-bomb assaults, erudite extrapolations from pop culture, and downright mind-bending metaphors to satisfy Manson fans who go for that style of writing. For me, however, I found it quite distracting to delve seriously into a deep philosophical discussion about Kant and Nietzsche’s theories when there was a metaphor like “sniffing cocaine from a hooker’s ass” sandwiched between.

Nevertheless, one may glean numerous nuggets of Manson wisdom from this latest tome; and even though Everything Is F*cked, it’s still probably well worth your time to find out just how bad things really are.