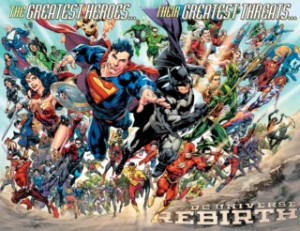 We finally can say goodbye to the New 52! The New 52 was sparked five years ago as a desperate attempt to jolt sales at a time when the comic industry was at an all-time low. Fans detested this DC Comics reboot because they had stripped many aspects of the original lore which they had instilled over their 80-plus year history, rendering the time invested in reading the comics (and all the money spent purchasing them) just about worthless, resulting in animosity towards the New 52. I do have to say, however, that the New 52 had some amazing series, most notably Snyder’s Batman run (checkout out the review on Pillow Talking Batman).

Rebirth isn’t just another reboot, shifting the 52 in another direction after its natural ending this month. This new direction reestablishes much of the lore lost post-Flashpoint from the reintroduction of Wally West to Aquaman and Mera getting married once again. Johns did a wonderful job writing this issue and used Wally West as his vessel to write an open-note apology to the fans. He explains that DC understands what went wrong and that this soft relaunch is working on making amends.

The issue is an 80-page monster of a comic book, but it flies by faster than you’d think with excellent storytelling and a seamless transition of art by the various artists. The story follows Wally West and his journey through the speed force, where he has been trapped since Flashpoint. He is trying his best to escape and to warn the other characters in the Universe about the impending doom, as well as inform them about what caused the events of the New 52 to unfold. Wally’s escape from the speed force evokes emotional appeal and goes full metal from his love Linda forgetting him and refusing to pull him out of the force (and mirroring DC’s treatment of him) to Barry eventually pulling him out. This mirrors the feelings of the fans who essentially forced DC to fix the New 52’s errors. But pay close attention and you’ll find there are many more questions which arise in this one-shot, ranging from the status of the Jokers (not a typo) to the status of Superman. These all will be resolved when the rest of the Rebirth lineup begins next month.

My only complaint is that Watchmen are now heavily intertwined with the main continuity of DC. I’m not going to reveal the major spoiler on this topic because you should experience it for yourself but, wow, this is a ballsy move on Johns’ part. For those of you who don’t know, Watchmen has always been in its own Universe, separate from the main one, since its origin. I’m sure this will be handled well, however, this is something to consider further down the road.

With this being said, DC couldn’t have chosen a better name than Rebirth since that is literally what this relaunch is doing – it is breathing new life into the stagnant New 52. There are countless questions going forward, but that is the case in any comic relaunch for the Universe. It will be exciting to see where this goes, but for right now DC is on the right path.