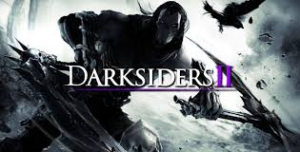 Well there is only one way to respond to this game after Darksiders, the first in the series, and that is: “HOLY $H%T!!!!!!!!!!” This game blew me out of the water and sent me flying to the moon! The developers improved upon everything with which I had problems in the original (such as the challenges of horseback riding) and enhanced everything that was right. There also is the added bonus of playing as “Death” – the deadliest of all the horsemen. This game is an action-packed hack and slash with an RPG vibe. Is there anything not to love? Unfortunately there is but one unhappy ending of sorts – Vigil, the company that developed the game, and the publisher, THQ, went under. Like a swan song, it feels as if they poured their hearts and souls into Darksiders II; it is a masterpiece in every sense of the word. It’s now put out by Nordic Games.

The game starts off from the end point of the last game – with you as Death seeking out the “Crowfather” to find a way to save his brother “War” from prosecution by the “Charred Council.” You discover that the four horsemen are part of an old race called “Nephilim.” The horsemen are infinitely powerful as they have taken command from the Council in exchange for killing their entire race. Their souls are stored in an amulet that the Council wants Death to destroy. Death is most efficient at killing and this is how he got the nicknames Death and “Kinslayer.” You later learn that Death has gone behind the Council’s back and has given the amulet to the Crowfather for safe keeping. After a bad turn of events, Death goes on a journey to not only save his brother but also to save himself from his own crime.

Darksiders II has a simple leveling-up system that has enough complexity to allow you a few different ways to play. Depending upon who you control, you can go into the “Harbinger” skill tree and really dive into the hack and slash gameplay that so many love; or you can go into the “Necromancer” skill tree and enjoy a more leisurely hack and slash; and if you become overwhelmed by too many enemies, you can just use a few spells and enjoy the show. You also can choose an in-between style where you dabble in both – that’s what I did and I had a blast. After making it through the joys of the skill trees you can start to utilize the armor and weapon system of the game, where like most games, items are dropped; but through a weapon leveling-up system you are able to make Death the way you would see him. There are three styles of armor: mage, warrior, or rogue, which are based upon their stats. The armor you choose also affects your appearance; if you go with mage-like armor then Death wears more cloth-like clothing. If you go with rogue-like armor then you wear small amounts of armor and leather; and if you go full warrior-type, then you will appear like a knight on the battlefield who has killed everyone without a single scratch. Your scythe also can receive upgrades and depending upon your choices, can blast like a meteorite or tap like the tip of a needle, hitting just the right spot making your enemy curse you for all eternity. I personally went for the playstyle with more opportunities for crushing critical strikes and strong, fast life steals.

Darksiders II is a massive success – and it accounts for most of the hours of my past three Saturdays. It was phenomenal just playing this game and exploring the mass terrain. The worlds are beautiful and although the game’s story is pretty simple, the character’s stories outside the game are greatly in-depth. The leveling system allows you to change during different points in the game. There also is an arena mode to battle with the monsters you’ve left in your wake. My favorite moment came when I heard the line, “Death you made it.” I jumped out of my seat in pure joy and watched as my favorite character, Wicked K, made a triumphant return in the only way that seemed fitting. The fight was quick and easy, with little dialogue. Preserving his glory, once he was defeated he jumped on his top hat and screamed, “Tea time!” as he flew off into the abyss. We’ll miss you.

As for criticisms, I found after playing it twice that the battle areas are too far and few and there isn’t a lot of dialogue in them. I think that there might have been some sizzle if the crow who travels with Death were to speak; he could criticize or mock Death’s failures or even give him a hard time when it takes too long to finish a puzzle. Or maybe the souls who are trapped inside Death could curse or threaten him. In addition, it might be a benefit if a few more worlds unlock once you have beaten the game to allow for more exploration instead of only allowing you to go back through all the areas you’ve already completed just to find a few insignificant stones or chests.

In my opinion, despite a few tweaks I might like to see, Darksiders II is a pure pleasure to play. For that, I personally would like to thank the developers; it is truly like a rare gem that I am grateful to have gotten my hands on. Overall I would rate this game “Uncle Buck” – it’s scary when you first begin. However, throughout the gameplay you still may be a little scared but you’ll be disappointed when it ends. You fall in love with Death and his unique quirks. There are plenty of laughs and moments where you hold your breath. But most importantly, there is a sheer awe factor you’ll get while watching Death mow down his enemies while wearing his iconic mask, striking fear into all who see it – before their ultimate demise.