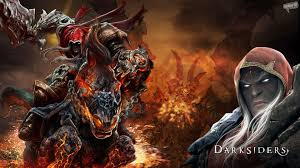 Darksiders is a game that struck many people as one that wasn’t worth the original retail price of $60 (like most games); however, if they were willing to wait for the price to drop, it turned out to be one of those hidden gems for the PS3 and Xbox 360. While the mechanics in some parts are a little slow, they make up for it with a fantastic intro. If you’ve never played the game or never thought you wanted to, that’s fine – I’m not your mother and this isn’t a chore – but if you have two minutes of free time, go on YouTube and check out Darksiders’ intro and man, you won’t be disappointed.

Darksiders’ main protagonist is the horseman “War.” He’s a don’t-take-any-of-your-crap kind of character with a bad case of amnesia. The game starts you off in the middle of an apocalyptic fight on Earth between Heaven and Hell. Next you meet a character known as “The Charred Council” who would appear thus far to be the strongest character they have introduced in the series (I’m hopeful for another installment). You then go on a journey to a destroyed Earth collecting rare items, figuring out puzzles, and defeating some of the most cliché bosses. There are some similarities to other games that you may note while playing: you can see elements of The Legend of Zelda and there definitely are some God of War elements, specifically in the boss fights and the way chests are implemented. Worthy of noting, the upgrading system isn’t half bad – it’s simple, with one or two good options in which to upgrade.

In my opinion, Darksiders’ strength is mainly because of the characters. War is most often the main protagonist who many gamers have come to really enjoy. But the side characters are where I fell in love. “The Watcher” was a jerk but he gave us a reason to care for War and “Samael,” who has an uncanny resemblance to Lucifer and almost makes me root for him because of his interactions with War.  However, my all-time favorite character from the series is “Wicked K.” How can you not love this top hat-wearing, British skeleton zombie who may be one of the greatest Easter eggs that any game ever has included.

If looking at the negatives about Darksiders, there are quite a few. I find it very annoying when playing as a horseman of the apocalypse that I ONLY CAN RIDE MY HORSE IN ONE PART OF THE GAME! Are you kidding me? And I also should be infinitely more destructive, but at the end of the game I feel as if I go from a guy in armor wielding a plastic spoon to a guy in armor wielding a plastic knife. In addition, the story’s progression is slower than a sloth popping Tylenol PM. Lastly, I simply wish there just could be more to do in the game.

Overall, I would consider Darksiders a success. It is challenging to introduce an entirely new world in a game and to have it remain interesting throughout. There definitely were things that could have been improved and it might have been prudent for it to have stayed in development for another few months. I would give this game a rating of “decent,” kind of like a new stepparent. You’re not too sure of what you’re getting but you accept it for what it is and eventually become happy about it.