Pillow Talking’s Review of BURT & ME 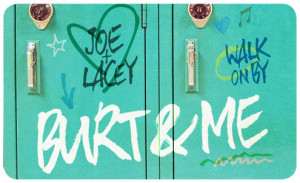 If romance, great tunes, and loads of infectious energy are the essential formula for curing the still-feels-like-winter, wishing-for-warmer-weather springtime doldrums, then Ivoryton Playhouse’s Burt & Me is just the remedy. This jukebox musical is jam-packed with instantly recognizable musical numbers by the one-and-only, iconic composer Burt Bacharach & lyricist Hal David and will have you smiling and singing along while your toes tap away to a non-stop and effervescent beat.

With a breezy book by Larry McKenna, Burt & Me, skillfully directed by Brian Feehan, tells the timeless (if not mildly uninspired) story of a budding romance between high school sweethearts Joe and Lacey in the sixties into the seventies. The two meet in choral class at a Catholic school and soon experience love, a requisite college-separation break-up, and ultimately find each other again; it’s all woven around such delightful songs as “(There’s) Always Something There to Remind Me,” “This Guy’s in Love with You,” “One Less Bell to Answer,” “I’ll Never Fall in Love Again,” and many, many more.

Joe, who also serves as the narrator, is played by an altogether affable Andy Christopher. A triple-threat, he immediately connects with the audience through his adept fourth-wall breaking, especially delightful charm and wit. Lacey, played by Lauren Gire (who delivered a memorable performance in Ivoryton’s My Way: A Musical Tribute to Frank Sinatra), is as lovely as she is talented with an enviable set of pipes. While the main story revolves around these two lovebirds, additional side stories include the relationship between father-and-son as well as the pair’s other friendships. Neal Mayer is wonderful as Alex, Joe’s caring, attentive piano-loving father. Mayer also doubles as Father DeJoseph, the head of the high school choral group where Joe and Lacey first meet.

Adrianne Hick as Sally is amusingly wry as Lacey’s friend who constantly rebuts the attention of Joe’s relentless friend Jerry – if looks could kill she’d have had him six feet under. Jerry, played by Josh Powell (who also is Dance Captain and wowed us in My Way as well), is the guy who’s always up for a good time but doesn’t know when enough’s enough. Katie Luke as Rebecca and Nathan Richardson as Nick round out the cast as friends to the couple and chorus members.

With a minimal set designed by Emily Nichols, Burt & Me plays much like a musical revue, reminiscent of Ivoryton’s  My Way. Shout outs to musicians who remain on stage throughout: Michael Morris, as Musical Director and on piano, Michael Raposo on woodwinds, Mark Gehret on bass, and Gus Gustamachio on drums/percussion. Kudos also to James Joseph Clark as Stage Manager; Lisa Bebey as Costume Designer; and Tate R. Burmeister as Lighting/Projection Designer.

Bacharach and David’s tunes are mainstays – covered by countless others throughout the years, there were but a very few in which I was unfamiliar. If the buzz around us at the theatre was any indication, including the woman behind me who sang in my ear the entire time as well as my husband who sang all the way home, this show is a definite crowd pleaser. But despite the others’ enthusiasm, I can only blame my husband/co-reviewer for the earworm I have had ever since –  “Do You Know the Way to San Jose” is on permanent loop in my brain!!

You’d have to had to have been an interdimensional alien not to be familiar with at least one song by Burt Bacharach and Hal David, especially if you were alive during the sixties, seventies, and eighties. Whether it is due to algorithms, ear worms, or just that theirs are “catchy” tunes, almost all of their tunes have been become iconic remnants capable of conjuring scenes, emotions and memories entwined with the bittersweet portions of our lives.

Burt & Me is a “jukebox” musical of some of the biggest hits by the musical duo including “Do You Know the Way to San Jose,” “Wishin’ and Hopin’,” “Promises, Promises,” “Blue on Blue,” “One Less Bell to Answer,” and my all-time favorite, “Raindrops Keep Falling on My Head.” Indeed, whenever I think of “Raindrops” I think of actress Katherine Ross sitting on the handlebars of a bicycle driven by Paul Newman in the classic scene from the film Butch Cassidy and the Sundance Kid.

Unlike some jukebox musicals which are just a sequential and/or random showcase of hits, there is actually a story about a couple falling in-and-out-and-back in love again thanks to a book by Larry McKenna and nicely paced direction by Brian Feehan. The tunes neatly punctuate the highs and lows in the relationship. 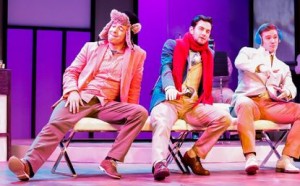 Props also must be given to a cast laden with triple threats including Andy Christopher (Joe), Lauren Gire (Lacey), Adrianne Hick (Sally), Neal Mayer (Alex), Katie Luke (Rebecca), and Nathan Richardson (Nick). A special shout-out should go to very talented Josh Powell (Jerry) who also served as the Dance Captain and whose performance Pillow Talking loved in the Sinatra musical My Way.

My only knit-picky criticism, if you can call it that, is in the title. What happened to lyricist Hal David? It should really be titled Burt, Hal & Me, but maybe that would have had a different marquee value and meaning.

The bottom line is that I cannot think of a better evening than listening to the music of Burt Bacharach and Hal David and watching a love story as old as time play out.