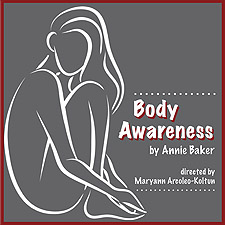 Body Awareness Week at Shirley State College in Vermont seems to mean different things to different people. To Phyllis, professor of psychology and the organizer for the school’s yearly event, it means addressing body image, body consciousness, and a spotlight to help end eating disorders. But what it does not mean is an exhibition in the student union of photographs of nude women. To her, that somehow contradicts the purpose of Body Awareness Week – a staunch feminist, she sees it as complete objectification of women and frankly, disgusting. But some disagree – it is art. And shouldn’t we love and appreciate the human form?

In other arenas, the practice of “body awareness” has roots in body psychology (although to many, this may be considered holistic “quackery”) – but it is by definition a blending of somatic and cognitive approaches to psychotherapy. It seeks to meld the dichotomy of body and mind and to promote better understanding of the power and interconnectedness of each. Its purpose is to allow people to become more aware of their bodies as a means to connect to oneself and to life in general; to become more attuned to one’s own inner sensations and emotions, as well as to improve one’s relations with other people.

Each of the characters in Annie Baker’s Body Awareness currently at The Ridgefield Theatre Barn might be well served to engage in some B-BAT sessions, better known as Basic Body Awareness Therapy. None is as in touch as they might be with either themselves or others, that’s for certain; yet everyone believes they see the issues in need of addressing in those around them. 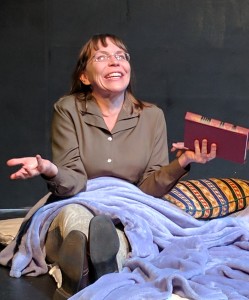 Phyllis (a terrific Rosemary Howard) is bristly, controlling, and academic; characterized by an orneriness which is far from the warm fuzziness exuded by her diffident partner Joyce, a high school teacher (Amber Mason is delightfully vulnerable yet conflicted). Phyllis purportedly has known she was a lesbian since childhood; Joyce, however, once was married to a man. The women’s worlds both mesh and collide, sometimes from moment to moment. And like random projectiles swirling around in their relationship vortex, regular run-ins with Joyce’s challenging, possibly Asperger’s-afflicted, caustic son Jared (a convincingly and at times hard-to-like Ryan Wenke) makes for some hairy, often darkly comedic situations. What Jared (who is 21 and still lives at home) lacks in social graces he makes up for in his disproportionate use of words – a self-professed autodidact and etymologist, he’s disgruntled with just about everything including his job at McDonald’s and his unfilled dating calendar.

Enter Frank (played by David Fritsch whom we loved in RTB’s Dirty Rotten Scoundrels), an odd free-spirit and photographer who’s come to stay with the threesome as a houseguest during Body Awareness Week. Akin to the butterfly flapping its wings, his mere presence doesn’t just send ripples through the household, it sends tidal waves. Every family member is affected by him and every relationship is strained. Phyllis sees his work as filth and his being there as a wedge between her and Joyce. Joyce is intrigued by both his work and him. Jared just seems to like having a man around – and having someone to ask questions, especially dating advice.

This tightly acted play is sharply directed by Maryann Arcoleo-Koltun and illuminates the many cracks that exist in the human condition which often are hidden away when everything is at a status quo. When life is easy, we coast through it as if on autopilot, in our zone and one with the world and ourselves. But when something shakes it up, we become stressed, we often overthink, and we may even distort reality. The goal in the practice of body awareness is for people to build the resources necessary to affect one’s own health, increase creativity, and make healthy choices in life. Frank is that catalyst – but in doing so he contorts the household and its members, while he himself remains unchanged, stealthily gliding in and back out like a cat burglar.

Shout outs to Pat Halbert as Assistant Director, Sherry Asch as Producer, and Gisela O’Brien as Stage Manager. Arcoleo-Koltun did an excellent job with an excellent but simple set design, allowing the focus to remain on the characters. Kudos to Mark Hankla for lighting design, O’Brien for properties, and Roberto Perez as the light/sound board operator, as well as to the rest of the production team for a job well done.

Body Awareness will make you think and think again. It is honest and even a bit jarring at times. Thank you RTB for yet another stimulating production!

Every object persists in its state of rest or uniform motion in a straight line unless it is compelled to change that state by forces impressed on it. – Newton’s Law of Motion 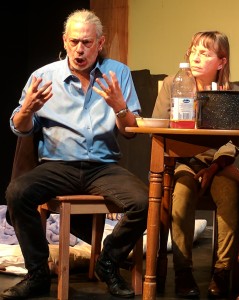 Ridgefield Theater Barn’s excellent production of Body Awareness is a perfect example of Newton’s Law of Motion expressed above. The main characters, Phyllis, a professor of psychology, and her partner Joyce, a high school teacher, live together with Joyce’s 21-year-old son, Jared, who may or may not have Asperger’s syndrome. The couple’s relationship appears to be a stable, loving one, despite some bumps here and there caused by the acerbic Jared. Like Newton’s Law, one gets the impression that the relationships between the protagonists will stay the course until they are acted upon by an outside force – in this case, one male professional photographer named Frank. It seems that Phyllis is hosting a body awareness week that features everything from a Palestinian children’s dance troupe to Frank’s gallery of naked women. Tensions rise when Frank becomes a family houseguest and creates chaos when Joyce asks to pose naked for him and later gives dating advice to Jared.

Body Awareness is an interesting gem of a play that was written by Annie Baker and premiered Off-Broadway in 2008. The act of introducing a frank (no pun intended since the main character is named Frank – the symbolism did not go unnoted), opinionated, self-confident, and potentially upsetting character into somewhat of a stable milieu is not unique. Indeed, there are certainly shades of the plot and Mark Ruffalo’s character in The Kids Are All Right. But it is Ms. Baker’s understated, soft-sell approach that makes the play unique. Both Frank and Jared are like pinballs to an extent, thrust into a relatively stable environment only to carom off the couple and each other, threatening to tilt and end the entire game. 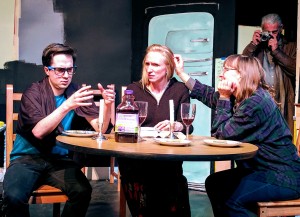 The casting and acting are both solid. Rosemary Howard is perfect as the staunch (and somewhat elitist) do-it-by-the-book psychology professor. While outwardly there is no trace of a warm and fuzzy persona, Ms. Howard does manage to convey an underlying vulnerability which resonates with the audience. Amber Mason is the perfect foil and complement as an actress to Ms. Howard’s character. Unlike her partner, the character of Joyce wears her heart on her sleeve and Ms. Mason is adept at conveying to the audience the range of conflicted emotions she is feeling at any given point in time. Ryan Wenke does an incredible job portraying Jared who may or may not have Asperger’s syndrome. His dry wit and comedic timing serve the role well. Finally, David Fritsch (who Pillow Talking loved in Dirty Rotten Scoundrels) was wonderful as both the good guy/bad guy Frank. Is Frank a dedicated artist with the best of intentions or a dirty rotten scoundrel who takes nude photos primarily for his own edification? Fritsch’s charismatic portrayal keeps us guessing. I was reminded of James Spader’s break out role as the bohemian videographer Graham who talks women into sharing their sexual fantasies on videotape.

Maryann Arcolelo-Koltun’s sensitive but nevertheless humorous direction of serious issues like sexual preferences, Asperger’s Syndrome, art vs. exhibitionism, and, most important of all, body awareness, make the play a must see.