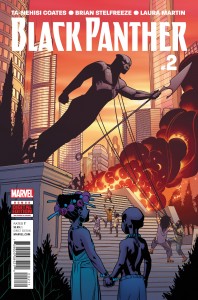 Overview: This issue continues the action, principles, and great story from last time. Coming off of the last issue, Wakanda still is in chaos with a force overtaking the country. As the uprising worsens, T’Challa finds himself in the middle of the conflict as an emerging king and protector.

We get to see the villain Killmonger in all his glory beginning to rise in influence by offering protection and power to the neighboring country of Wakanda. Although Killmonger is dead, he has spawned many followers who are asking for the head of T’Challa! In Killmonger’s wake is Zenzi, the woman responsible for the miner riots in the first issue and she continues to make her presence known. The Midnight Angels return making quite an impact as they save Wakandan women from terrorists and then plan out their next act on the corruption within the country.

The issue dives into T’Challa’s history and his path to becoming King. The community also wonders about the status of the kingdom and the ruling of T’Challa…What is my remedy against the robber, who so broke into my house?

The action is great and is made even better with striking art styling by Stelfreeze once again. The mental attack on T’Challa is probably the best and most important scene as that opens the pathway to the future of the series.