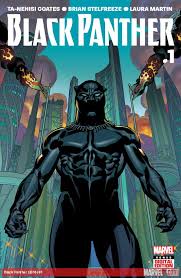 Overview: Black Panther is definitely getting some love this year. He is in Marvel’s upcoming Captain America: Civil War and he is getting a brand new comic book which will feature him and the country of Wakanda. This celebrates the 50th anniversary since his creation by Stan Lee and Jack Kirby

Now who is Black Panther you might ask? Well here is a quick bio: He is part animal, part man (whose name is T’Challa). He fights for his country as the Black Panther, calling upon his ancestors to gain strength…mainly the Black Panther God! With a whole country of vibranium, the most valuable element on the face of the planet, under his command, it turns out to be his greatest strength (as his signature suit is constructed from it), but also his greatest weakness.

The issue revolves around Wakanda, the most technologically advanced country on Earth. On the brink of war, Wakanda begins to see seeds of rebellion starting with the miners who gather the vibranium. All the tribes that share the emblem of the country are at odds and are pulling apart. Black Panther must balance his life as the country’s protector as well as the ruler of the country. A very decent start to Ta-Nehisi Coates’ career in the comic book industry!

Now for the art! Brian Stelfreeze has been around the block and this is just one more example of his impressive stylings. His blend of old world vs. futuristic city fits Wakanda perfectly. His actions scenes are visually appealing and pounce off the page.

All in all, this is the comic Black Panther finally deserves and provides a strong foothold for him to take a larger role in the Marvel Comics and Marvel Cinematic Universe.