Someday Productions LLC and Pillow Talking are pleased to present the following review of BENNY & JOON at the Paper Mill Playhouse. 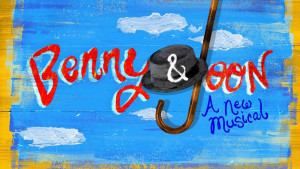 When I heard that the Tony Award-winning Paper Mill Playhouse was launching the East Coast Premiere of the musical Benny & Joon, my heart was all aflutter. There’s pure delight in getting to skip down memory lane and revisit a story that held a special place for me and confirmed in so many ways why I chose to pursue the field of psychology. For those of you who may never have seen the 1993 Johnny Depp/Mary Stuart Masterson/Aidan Quinn cinematic confection (written by Barry Berman and Leslie McNeil), it’s a sweetly endearing romantic comedy which navigates and helps to normalize mental illness, while also bringing to light the importance of the supports of family, friends, and romantic connections for both caregivers and the recipients of care. Benny & Joon, in both incarnations, proves that love can be found in the most unexpected places; that even those among us who have a few bumps or baggage can still find our one and only; and that a clothing iron is a great substitute for a stove in making a mean grilled cheese sandwich.

Recently my husband/co-reviewer, who is also a communications professor, faced off with a student to debate film vs. theatre. And while he wasn’t necessarily pro or con either position (he loves both, as do I), his side was to prove that stage ranks over cinema. His main point? Would you rather be breathing the same air as Bradley Cooper while he plays guitar, or simply watch a flat screen version of him? To me, the thing about theatre – really good theatre – is that it is so immersive, you’re drawn into the characters’ lives, into their strange little worlds, where you’re connected by invisible strings to their hearts and souls. 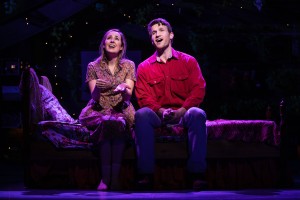 That’s precisely what the musical Benny & Joon does. With a book by Kirsten Guenther, music by Nolan Gasser, and lyrics by Mindy Dickstein, the musical stays mostly in line with the film version. Its very three-dimensional characters are vibrant, layered, and authentic. And everyone has baggage – Benny, the protective and tightly wound big brother, takes care of quirky artist Juniper (Joon) who lives with the challenges of schizophrenia. At a young age, the pair lost their parents in a car accident and with no other family, they’ve become dependent on one another. But their trauma both binds them and drives a wedge between them. They understand each other except when they don’t. It’s not until Joon “wins” a houseguest in a card game that their odd little world is upended and they are forced to face both their individual and shared demons.

That houseguest is none other than Sam, an odd duck himself, who channels the physicality of Buster Keaton and is something of a cinephile savant who quotes lines from every movie imaginable. It’s a coping mechanism he’s used since his abusive childhood and frankly, is as charming as all get out. Benny resists Sam’s presence at first, but it’s not long before Sam earns his keep. He’s a rollerskating housekeeper, an undercover babysitter, and most importantly, a calming presence for Joon. It’s too good to be true, however, and it’s Benny who can’t handle the calm when he’s grown so accustomed to navigating the storms. 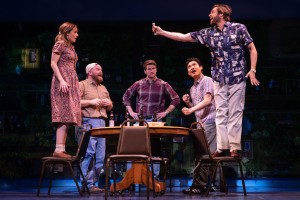 With a knock-down, drag-out cast and fabulously inventive sets by Dane Laffrey, Benny & Joon the musical succeeds in bringing the film’s endearing story out of the video store era and into today, enchanting a new audience while at the same time, letting saps like me feel the feels all over again. Under the skillful direction of Jack Cummings III with choreography by Scott Rink, Claybourne Elder is wonderful as the fiercely protective Benny whose circumscribed boundaries begin to crumble when Sam enters the picture and he’s forced to see Joon as an adult woman with her own needs, wants, and desires. Elder’s chemistry with Hannah Elless as Joon is palpable, as is her chemistry with Bryce Pinkham as Sam. Elless brings sensitivity and authenticity to the unstable and unpredictable Joon, who bounces between silliness and psychosis. There are beautiful and tender moments between Elless and Pinkham, notably during a scene when they are painting together. Pinkham is in a word, phenomenal. I personally wouldn’t want to have to rival the likes of Johnny Depp, as Depp is so adept at making every character his own, but Pinkham slides into the role of Sam with ease and aplomb. His flawless antics including some extraordinary plate tossing add to this colorful character’s appeal.

Secondary but no less memorable characters are Tatiana Wechsler as Ruthie, Benny’s love interest whom he does everything to keep at arm’s length. Wechsler brings warmth to the character who is loving and accepting of everyone she meets. Natalie Toro doubles Mrs. Smail, the frustrated housekeeper and Dr. Cortez, the doctor who tries to support Joon and Benny in making the best decisions for Joon’s care. Benny’s friends Mike, Larry, and Waldo played by Colin Hanlon (also Dance Captain), Paolo Montalban, and Jacob Keith Watson, respectively, are a trio of talent who provide a lot of comedic moments, including Watson’s double role of the mohawked Video Store Owner.

Kudos to R. Lee Kennedy for lighting design; Kai Harada for sound design; Rachael Geier for wig & hair design. Well-deserved shout-outs also to the orchestra: to J. Oconer Navarro as Conductor and on keyboards; to Corey Wachala as Associate Conductor and on keyboards; Amy Hamilton-Soto as Concertmaster and on violin; E. Zoe Hassman on cello; Emilio Guarino on bass; Kristy Norter and Christine MacDonnell on woodwinds; Ann Mendoker on horn; and Joshua Priest on drums/percussion. 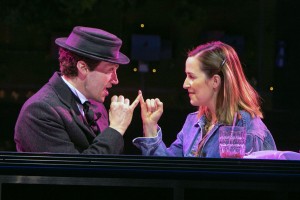 One of the things I greatly enjoy about Paper Mill Playhouse is their choices in doing new work and taking risks. Benny & Joon is perhaps not the most unique story ever told, but it addresses issues with sensitivity and humor, leaving its audience with feelings of hope and promise. Benny & Joon provides an entirely enjoyable theatrical experience that will make you want to go home after to dust off the old VCR and pop in its original source material, while you pine away for the days of Blockbuster video rentals and other nineties nostalgia. And hey – there’s classic Depp in it – it doesn’t get any better than that!

Benny & Joon was a 1993 “sleeper” romcom hit about a caregiving brother, Benny, who protects his eccentric and in reality, mentally ill sister, Joon, from the world at large including from institutionalization. Benny is burnt out and about to give up when another eccentric character, Sam, enters their lives and ends up not only being able to relate to Joon, but falls in love with her. The film starred Aidan Quinn (Benny), Mary Stuart Masterson (Joon) and, for the most part, was a break out role for Johnny Depp (Sam) earning him a Golden Globe for his performance. 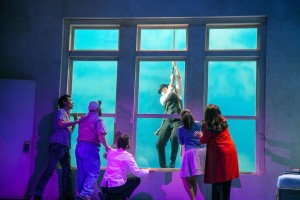 A stage musical adaptation based on the MGM film was created with a book by Kirsten Guenther, music by Nolan Glasser, and lyrics by Mindi Dickstein. Pillow Talking had the opportunity to see the East Coast Premiere at the Tony Award-winning Paper Mill Playhouse. While It is often the case that it is easier to adapt a play to a film based on the limitations of a live stage performance versus the limitless aspects of the cinematic world of technology, Benny & Joon The Musical is the perfect exception. Indeed, its rather simple yet engaging story seems to be, in many ways, more suited to the intimacy of the stage. An eccentric and unstable person finding love, support and “next to normalcy” stability (pun intended) is the kind of archetypical love story that provides hope and inspiration in our sometimes very flawed and crisis-driven world. While in many ways the themes and motifs of the play are derivative (I cannot help but compare them to the ones in Silver Linings Playbook), there is a fresh originality and vitality to this production provided by the talented cast and excellent direction by Jack Cummings III. 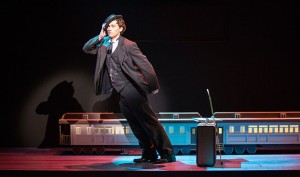 Obviously the part of Sam, originally played by Johnny Depp in the film, is a pivotal role, relying heavily on comedic moves and timing dating back to the silent film world when Charlie Chaplin and Buster Keaton reigned supreme. In fact, when we first meet Sam, we find him reading a biography of Buster Keaton. If that is not enough for us to make the connection, there are Chaplin’s cane and Keaton’s hat to constantly remind us that Sam is a character from a bygone era. And then there are his spot-on quotes from classic films that serve as his primary form of communication. The point is, it takes an actor fluid with his instrument and timing. Bryce Pinkham is such an actor. He is absolutely charming as Sam and is able to make the role his own despite Johnny Depp’s footprint.

Both Hannah Elless (Joon) and Claybourne Elder (Benny) have a solid chemistry together as the protective older brother and the younger unstable sister. Colon Hanlon (Mike), Paolo Montalban (Larry), and Jacob Keith Watson (Waldo/Video Store Owner) are hysterical as Benny’s friends. Their comedic repartee harken back to some of the great comedy teams of the past like The Three Stooges, The Marx Brothers, Martin and Lewis, and Abbott and Costello. I’m certain this was a deliberate conceit as well as another homage to vintage comedy. One of my favorite almost slapstick numbers was “I Can Help” by Pinkham and Watson.

Benny & Joon The Musical stands on its own as an engaging, enjoyable and thoroughly entertaining theatrical piece that should be experienced.