Someday Productions LLC and Pillow Talking are pleased to present the following review of the game BATMAN: ARKHAM KNIGHT by Nicholas Dunn 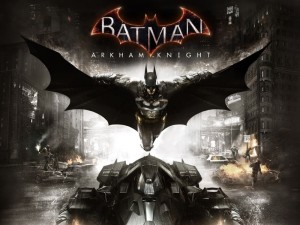 When first immersing yourself into the Arkham games’ world you may be amazed and astonished by the vast beauty of a sandbox-style game that brings Batman and more importantly, Gotham, to life. The gameplay is smooth when you are gliding around in combat or even sneaking along rooftops or sewers to surprise Batman’s enemies. Where the game struggles is with the Batmobile. It’s an amazing vehicle and the fact that the city’s civilians have left, makes it so it is morally okay to drive around the streets. The reason I say this is because you are essentially driving a tank that is pumping cocaine and steroids at the same time; if anyone gets in the way of the vehicle, in reality they would be dead. So when you hit the thugs who roam the streets of Gotham, it’s a little bit easier on gamers to accept the fact you’ve hit an individual while driving a tank going over 80 mph.

Besides the Batmobile, nothing else really stood out to me as it being a bad game. The story is well written, the dialogue is believable, the graphics make gamers feel like the world is real, and vast cast of characters keeps anyone’s interest.

The biggest surprise of the game wasn’t who the Arkham Knight was, because most people on the internet had guessed the right answer a year before the game even came out. The most shocking thing was the psychological drama that Batman was experiencing throughout the game – from the Scarecrow pushing Batman’s will and his perception of reality which caused him to face fears he didn’t even know he had; to Gotham’s smiling Prince of Crime who had sadly passed away in the last game but came back in this game in a way that fans never suspected.

If I could wish for anything in this game (after enjoying the vast open world and beating it) I wish there had been a mode where Mark Hamill’s Joker would still be trying to break out of your psyche to mess with you and be with you in every situation with Batman. I think just hearing that chilling laugh which brings fans so much joy on a consistent level would make any gamer excited to pick up their controller and dive straight in.

Nicholas was born in a little place called Wonderland, but unfortunately for him, he never had an anxious white rabbit or a drug-tripping cat to guide him. He never imagined he would amount to greatness and he thought he would be lost forever – but he did find something special at the age of 5 when he got a yellow Pokémon-themed Game Boy Color. Since then he has been doing everything in his power to escape reality and jump into any virtual wonderland that is created. He plays everything from fantasy adventure to challenging shooting games where you hear the worst imaginable vocabulary by a fourteen-year-old. Although game systems are his main love, he does dabble in the art of PC gaming and app gaming when a sudden spark of interest strikes him.