Pillow Talking’s Review of ANYTHING GOES 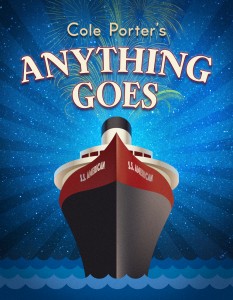 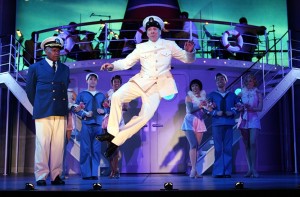 It would be so easy to start off this review of Anything Goes as so many critics of this production do – It’s Delightful! It’s De-Lovely! I Got a Kick Out Of It! It’s the Tops! It’s Easy to Love! But I won’t (or did I just do exactly that?) Okay, I know I did. But there’s good reason to pull such punny openers from some of the production’s timeless song titles – and that’s because Goodspeed Musicals provided its audience with a truly unforgettable night of classic musical theatre with top-notch performers, incredible staging, and fantastic direction and choreography. So Buddie, Beware, your teeth might hurt after this sweet review, because I don’t have a single criticism to proffer.

When you grow up in a dance and musical theatre family, one automatically would assume you’d have seen all of the classics. My mother was a ballet dancer with biggies like the Boston Ballet and American Ballet Theater – she met my father, also a dancer and performer who did national tours and summer stock, and they even went on to perform together with heavy hitters like Liza Minelli, Chita Rivera, and Morgan Freeman. But while I’ve seen some of the 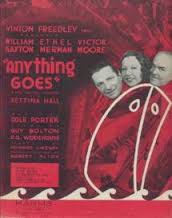 classics, Anything Goes hadn’t been checked off my list until now. I can say that seeing it for the first time at Goodspeed was everything I hoped it would be and more.

Cole Porter’s production, originally debuting on Broadway in 1934, has seen countless revivals on- and Off-Broadway, in national and international tours, as well as film and TV versions. That comes as no surprise, because the story, a lighthearted, zany, farcical tale still holds up. The original book was by Guy Bolton & P.G. Wodehouse and Howard Lindsay & Russel Crouse; the new book was by Timothy Crouse and John Weidman; and here we are eight decades later on the Connecticut River in East Haddam, CT where it plays to ecstatic audiences and is a rousing success!

All aboard they go to sail the seas from New York to London, and everyone’s hoping to hob nob with celebrities. What they get instead are a love struck stowaway, an Evangelist-turned-nightclub singer, a debutante, a couple of gangsters, a moll, a shabbily shorn Pomeranian, and a melange of other colorful characters with their own, but often intersecting agendas. There never was a dull moment to be had on the buoyant S.S. American. 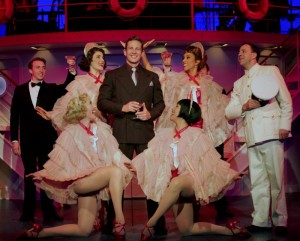 The dashing and charismatic David Harris who is no stranger to leading roles, is superb as Billy Crocker, the Wall Street broker-cum-stowaway who is the object of nightclub singer Reno Sweeney’s affection but hopelessly in love with debutante Hope Harcourt. His voice is phenomenal as is his comedic timing (I especially loved when he broke up over his costar Stephen DeRosa’s over-the-top antics). Rashidra Scott is the embodiment of the sexy, confident Reno – Scott is a consummate performer, and can she belt out those lyrics! The dopamine rush gave me goosebumps – musical frisson at its finest. But that’s not the full scope of her talents – in the classic “Anything Goes” tap sequence, I literally had tears in my eyes as she led the company in the most dynamic dance number I’ve seen in ages. 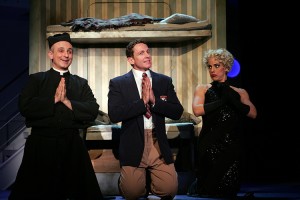 I must say that Broadway and Off-Broadway veteran DeRosa as Moonface Martin literally steals the show in each and every scene. A truly gifted comedic actor, he is spot-on in every way and just an amazing physical actor who hams it up with slapstick and overall clowning around that truly works – but even a mere smirk from him is enough to bring the entire audience to hysterics (and as I said above, he momentarily wrecked Harris, and seemed quite proud of himself for doing so!) 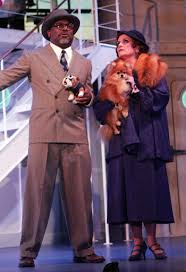 Songbird Hannah Florence who is no stranger to the boards, delivers marvelously as the prim and proper Hope, kowtowing to and playing well off of her overbearing, kvetching, status-seeking mother played brilliantly by Denise Lute. Desireé Davar is pure joy as the engagingly brazen Erma, Moonface’s girlfriend (and what a pair of legs!) Benjamin Howes is perfection as the bumbling Brit Lord Evelyn Oakleigh, Hope’s betrothed, and lover of all things slang (American that is). Broadway vet Kingsley Leggs is wonderful as Billy’s nearsighted and often inebriated boss Elisha J. Whitney. And I had one of those context-memory failures when I was riveted to the ship’s purser, played by Patrick Richwood, yet could not figure out if I’d seen him before or if he just resembled someone. His facial expressions are unmistakable and I was giddy to find out that I did in fact know him from one of my favorite films, Pretty Woman, among others!

Jay Aubrey Jones as The Captain, John Ramsay as Fred and Reverend Henry T. Dobson, Christopher Shin as Luke, and Sam Tanabe as John, as well as the ensemble which included Brittany Bohn, Sy Chounchaisit, Alison Jantzie, Jay Aubrey Jones, John Ramsey, Christopher Shin, Karilyn Ashley Surratt, Sam Tanabe, James Tolbert, Edward Tolve, and John T. Wolfe round out the cast with lively acting, singing, and dancing. And one cannot leave out Trixie as Mrs. Harcourt’s four-legged companion, Cheeky. Trixie has come a long way from her rescue and already has two other stage credits to her name! 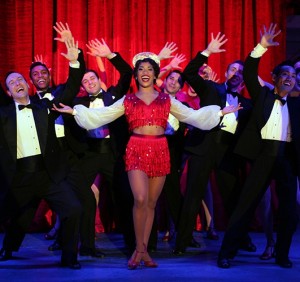 Director Daniel Goldstein should be commended for a tight, engaging, vibrant piece which was expertly choreographed by Kelli Barclay; both are vets of Goodspeed’s many productions. I especially loved Wilson Chin’s scenic design as well as Ilona Somogyi’s costume design. Kudos to Michael O’Flaherty for music direction, Brian Tovar for lighting, Jay Hilton for sound and the rest of the crew for their impeccable synchrony.

So here goes…get ready for another pun (sorry!) – but I recommend you buy your tickets quickly and head down to the Connecticut River before this one sails away!

The Goodspeed Opera House’s production of Anything Goes is anything but boring, dull, uninteresting, or unworthy of the price of admission. In fact, Anything Goes is everything spectacular with great singing, show-stopping dancing and belly laughs galore. Goodspeed has a verifiable summer hit on its hands.

Part of the success is choosing a classic Cole Porter show with a rich pedigree and iconic tunes like Anything Goes, I Get a Kick Out of You and You’re the Top. But the balance of the show’s success rests within Goodspeed and its director Daniel Goldstein’s modern adaptation of it. 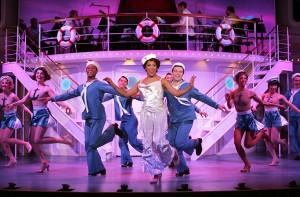 Let’s start with the excellent casting – it’s everything perfect! Rashidra Scott as Reno Sweeny is a triple threat in the truest sense of the word. She can sing and she can act. But, boy, can she dance too! She does a show-stopping tap dance number with the ensemble at the end of Act 1 that is simply fantastic. I could actually feel the vibrations of their dancing flow over the floor and rise into my seat! David Harris as Billy Crocker has just the right amount of charm, presence, and wit to pull off the love sick hero without over sentimentalizing the role. Hannah Florence as Hope Harcourt, the focus of Billy’s ardent desires, plays the role with a perfect balance of damsel-in-distress vulnerability and an undercoating of strength just waiting to be exposed. 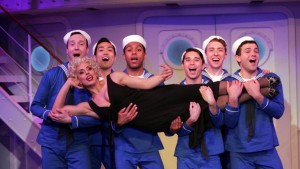 The other principals are equally as adept as developing real character arcs and not just characterizations. Benjamin Howes as Lord Evelyn Oakley, for example, initially comes off as the stuffed shirt, misguided paramour who stands in the way of true love. Yet, by the end of the show, you’ve come to cheer him on as the flawed, but lovable guy (and dancer) that he is. The same is true for Desiree Davar’s performance as Erma, another triple threat that makes her much deadlier as a performer than the moll she plays. She was nimbly carried so many times by the ensemble in dance numbers that I thought for a sec we were at a rave concert. Patrick Richwood as the ship’s stressed out purser can get a laugh with just his facial expressions and body movements. He makes the perfect foil to Jay Aubrey Jones’ engaging portrayal of the Captain. And speaking of engaging performances and perfect foils, Kingsley Leggs and Denise Lute as Elisha J. Whitney and Mrs. Evangeline Harcourt respectively, played off each other like a Burns and Allen comedy team. And what can we say about Stephen DeRosa who played Moonface Martin? Mr. DeRosa plays a criminal and all I can say he definitely was guilty of stealing scenes in the 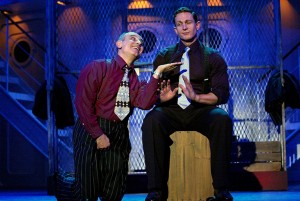 show. He was hilarious. His comic timing was impeccable. He knows how to milk a hot audience, too. You know an actor also is a great comic when he can not only elicit belly laughs from the audience, but break up his fellow actors on stage. Joel Grey played the role the last time on Broadway so Mr. DeRosa had big shoes to fill – and he filled them nicely. His performance was MasterCard Gold – it was priceless. And last among the principals, but certainly not least, is Trixie the dog who played Cheeky. She’s obviously a method actress because her performance was inhuman. If only my two Pomeranians and Goldendoodle could act like her! 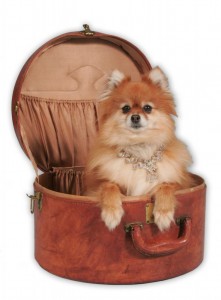 Mr. Goldstein did a brilliant job directing, especially with the staging and blocking given the spatial limitations of Goodspeed. Ditto to the choreographer Kelli Barclay. The dance numbers (especially the tap dancing) were awesome (props to musical director Michael O’Flaherty). Great set design by Wilson Chin.

When I heard Goodspeed was doing Anything Goes, my knee-jerk reaction was Uh-oh, will the zany over the top humor seem dated? I am happy to say that this cast and crew made the production engaging, fresh and funny. It brought me back to the days of the hilarious madcap movies like It’s a Mad, Mad, Mad, Mad world and One Night in the Tropics. There wasn’t a slow spot in the show and it is perfect family entertainment. I know audiences will enjoy the show as much as I’ve enjoyed writing this review.  So go see it—you’ll get a “kick” out of it.

Okay, so I’m not very original.  What do you expect, I’m a critic! 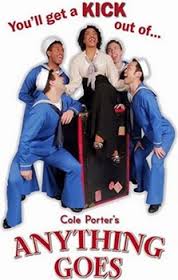