Pillow Talking’s Review of ANNIE GET YOUR GUN 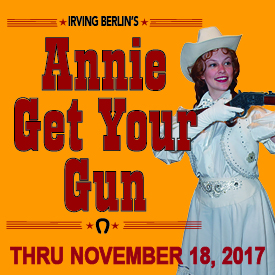 With the United Nations’ International Day of the Girl just around the corner in October, it only seems fitting that a production like Annie Get Your Gun would find its legs; a show whose themes thoroughly embrace the power of the girl. Established in 2012, International Day of the Girl’s mission is to provide opportunities for girls and address gender inequality – and in many ways, that’s exactly what composer/lyricist Irving Berlin along with book writers Herbert and Dorothy Fields set out to illustrate. Ahead of their time, this 1946 crowd pleaser shows us that Anything [A Man] Can Do, A Woman Can Do Better, or at the very least, just as well. 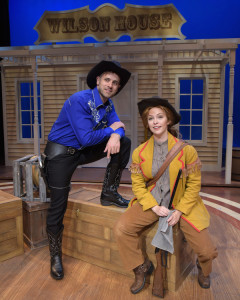 Westchester Broadway Theatre (WBT) launches its lively 202nd production with exceptional verve, expertly directed and choreographed by Richard Stafford. A fictionalized account of the folk hero Annie Oakley, in addition to highlighting the strength and equal rights of women, it is swathed with the psychological principle of grit. If anything leads to success in life, it is the traits of perseverance, passion, and strength of character. Our plucky protagonist Annie (fabulous just doesn’t do triple-threat – singer, dancer, and actor – Devon Perry’s portrayal justice) has grit in abundance. A tenacious tomboy and poor country bumpkin, she proves herself a better markswoman than the handsome star of Buffalo Bill’s Wild West Show, Frank Butler (a flawless portrayal by the charming Adam Kemmerer), a suave sharpshooter and shameless womanizer who travels from town to town showing off more than just his rifle-shooting ability.

The two meet by happenstance outside the Wilson Hotel after Charlie Davenport, the Wild West Show’s manager (a terrific Kilty Reidy, a veteran of Westchester’s many productions), tries to book the hotel for the show. Annie and Frank soon find themselves rivals when the hotel owner, Foster Wilson (Kevin C. Loomis is wonderful), takes a side bet and matches Annie with Frank in a shoot-out. Annie proves she can hold her own against Frank – in fact, she beats him easily and is asked to join the show. It’s also not long before the two are smitten with each other which sets the duo on a complicated course for competition and love – two things which rarely pair well. 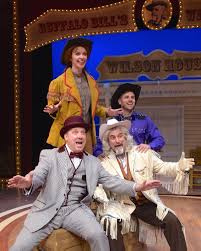 The troupe sets off by train, joined also by Dolly Tate, Frank’s obnoxious assistant (a lovely and comical Sarah Cline) who has no love for the new addition to the show; Buffalo Bill himself (Gary Lynch is fantastic as the commanding showman); and Chief Sitting Bull (Marshall Factora is a comic delight); as well as Annie’s siblings, a phenomenally talented young group, all “veterans” of WBT: Haylie Shea Christiano as Little Jake (who also played Molly in WBT’s Annie); Ruby Griffin as Nellie (who also played July in Annie); and Hannah Jane Moore as Jessie (Linda Manero in WBT’s Saturday Night Fever). Along the way they run into competitor Pawnee Bill (Loomis doubles) who’s also looking to fill the seats for his own show. Other performers in the Wild West Show and train employees are played by a spot-on Ensemble: Joseph Cullinane (also Dance Captain), Michael Dauer, James Spencer Dean (also Swing), Shanna Heverly, Lucy Horton, Ryan Kleinman, Kevin Loreque, Sophie Lee Morris, Lizzy Palmer, Joey Rodriguez, and Brittany Williams. 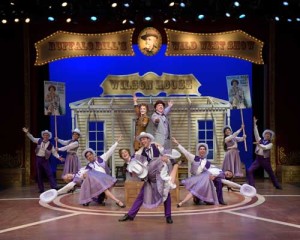 The show is infectious, the songs are classic (who hasn’t heard “There’s No Business Like Show Business” and “Anything You Can Do”?), and the themes are as relevant today as they were more than seventy years ago. As always, WBT does an incredible job pulling together all the pieces of the Gestalt. Kudos to Shane Parus for Musical Direction; Steve Loftus for Set Design; Kara Branch for Costume Design; Andrew Gmoser for Lighting Design; Mark Zuckerman for Sound Design; Grumpy’s Props for Properties; Gerard Kelly for Hair/Wig Design; Victor Lukas as Production Stage Manager; Duane McDevitt as Assistant Stage Manager; and Kristyn Pope as Associate Choreographer. Final shout-outs to Musicians: Shane Parus, Keyboards; John Bowen, Assistant Musical Director/Keyboards; James Mack, Drums/Percussion; Jordan Jancz, Bass; Brian Uhl, Trumpet; Steven Bleifuss, Trombone; and Von Ann Stutler, Musical Contractor.

You can’t help but sing along, tap your feet, and feel the smile plastered across your face for the entirety of this production. You won’t need a gun, but you’ll surely need to snatch up your tickets – come one, come all to Buffalo Bill’s Wild West Show, I mean, to Annie Get Your Gun!

Despite the fact that the original musical appeared on Broadway in 1946, like the true test of any classic, it still holds up and resonates with audiences today. The story follows a fictionalized treatment of the real-life personage of Annie Oakley, who was a famous female sharpshooter in the 1880s. How fictionalized is up to the history revisionists, because the play does follow somewhat accurately Ms. Oakley’s rise to fame after beating sharpshooter Frank E. Butler in an exhibition match, her contemporary at the time; their subsequent romance, eventual marriage, and their joining Buffalo Bill’s Wild West Show.

WBT has scored a bullseye with this enormously talented cast. Devon Perry is wonderful as the iconic Annie Oakley. She can sing, dance, tout a rifle like a SWAT sharpshooter and still exhibit a vulnerable, attractive, feminine mystique. (I also like her homage to the real-life Annie Oakley in her program bio. It is evident that Ms. Perry has thoroughly researched her character.) Adam Kemmerer as Frank Butler, is the perfect complement to Ms. Perry’s portrayal. Handsome, charismatic, with a commanding presence on stage, he is more than a match for the headstrong Oakley and definitely gives her a run for her money in both Cupid’s arrows and bullets. Kilty Reidy, 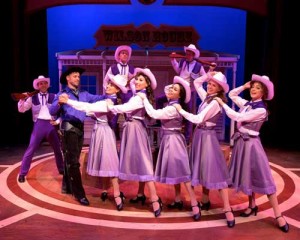 Veteran Director and Choreographer, Richard Stafford, did a Herculean task orchestrating and navigating all the movable parts of a complex show like Annie Get Your Gun.

Of course, it doesn’t hurt to have an iconic musical score by Irving Berlin, with just about every musical number ripe for an earworm on the way home including: “The Girl That I Marry,” “You Can’t Get a Man With a Gun,” and, of course, “There’s No Business Like Show Business.”

WBT’s Annie Get Your Gun is a fun-filled blast for the entire family. You must target it as the one to see before Buffalo Bill’s Wild West Show moves on into the sunset.