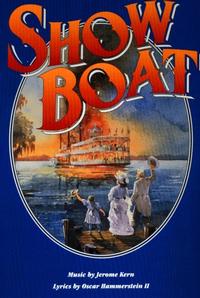 Westchester Broadway Theatre’s (WBT) Show Boat proves once again that an historic, watershed play (if it’s well-staged and acted) can satisfy a modern audience. The play is based on a sprawling novel by Edna Ferber about three generations of show biz people on the Mississippi. The play and novel covers from the late 1800s to 1928. Back in the late 20s, musicals were comedies consisting mostly of vaudeville-type humor and skits. The thought of integrating serious dramatic issues and three-dimensional characters was unheard of – until Jerome Kern and Oscar Hammerstein II teamed up to create Show Boat. 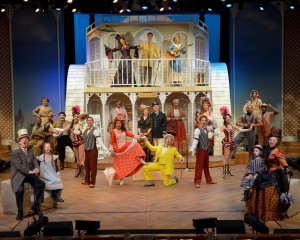 (All photos by John Vecchiolla) The Cast of Showboat

The serious issues (racial prejudice, interracial marriage, tragic heartbreak) that were prevalent back then (and still haunt us today) are interwoven with a mixed score of upbeat music like “Where’s the Mate for Me” and sad ballads like “Mis’ry’s Comin’ Aroun’.” And the plot is as old as time – ill-fated love, heartbreak, enduring hope, redemption, forgiveness.  The Cotton Blossom, the river showboat, is owned and operated by Captain Andy and his wife Parthy. Their only daughter, Magnolia, is swept off her feet by a gentlemen/gambler Gaylord Ravenal. Unfortunately, it is a marriage made in both heaven and hell. (Spoiler alert.) His gambling and free-wheeling lifestyle ultimately leads to financial ruin and the break-up of his marriage with Magnolia and the abandonment of his daughter, Kim. It is decades before there is a reconciliation and forgiveness. 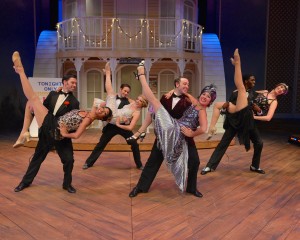 The Ensemble Performs The Charleston

The new production by WBT captures the essence of the original show while, at the same time, is adapted and updated to suit the palette of today’s theatre goers. The staging, utilizing lower stages, trap doors and moveable skids, creates flawless transitions between scenes. There is a choreographed number by the Ensemble demonstrating the different styles of dances (and to show the passing of time) between the 1890s and 1920s that is brilliant.

This production boasts a big and tight-knit cast. Handsome John Preator (Ravenal) has just the right undercoating of sleaze and mistrust covered by a mantle of charm and sophistication that make you root for him no matter what. Actress Lee Harrington (Magnolia) sings her heart out as the ingénue that matures into a woman and caring mother. Veteran stage actors Jamie Ross and Karen Murphy are perfect as the different-as-night-and-day, husband-and-wife owners of the showboat. Speaking of perfect casting mates, Amanda Pulcini (Ellie May Chipley) and Daniel Scott Walton (Frank Schultz) are spot-on as performing partners and later husband-and-wife sidekicks, who lend just the right amount of comic relief when needed. Did someone say Sonny and Cher-like? Inga Ballard, an experienced stage actress with a resume as long as my arm, is wonderful as Queenie. And a special shout-out to Justin R.G. Holcomb, who plays the evil Pete so well you hate him even when he is not on stage. 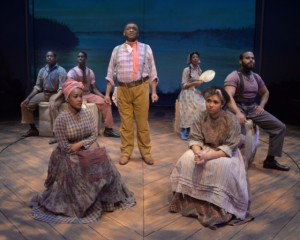 The iconic song, “Ol’ Man River” needs a great singer and actor to pull it off. The song is about life and how the world (the river) goes on irrespective of the trials and tribulation of us little humans. It doesn’t care about our worries, problems, dreams, hopes desires etc.; it just keeps rolling along. Which is a reminder to all of us that we must make the most of each day. Fortunately, the WBT has a great actor to pull the part of Joe off in Michael James Leslie. Apart from his great acting chops, his opening and reprise of “Ol’ Man River” gave me chills.

Broadway and Off-Broadway director (and no stranger to WBT) Richard Stafford brought this production to life. Kudos also must go to the unseen and unsung heroes — musical director Ryan Edward Wise and the rest of his band; sets and costume designers Michael Bottari and Ron Case, and the rest of the technical directors and stagehands.

I remember when the WBT opened back in the 70s (dated myself – oh well) and was filled with leisure suits and buffet lines. Show Boat is the theatre’s 192nd production. The WBT is a classic – and like all classics – it has adapted and withstood the test of time.  I look forward to many more productions at WBT.

There’s something really enjoyable about dinner theatre. It’s the all-in-one, don’t-have-to-do-much-in-the-way-of-advanced-planning, get-comfortable-and-just-stay-put-for-the-entire-ride that makes for a truly pleasant evening (read: she has a crazy life and anything that makes it easier is welcome!) That’s precisely what you get at Westchester Broadway Theatre, New York’s longest-running, Equity theatre. Despite arriving a few minutes late (we got a bit lost) we had plenty of time to eat and relax before their current and 192nd mainstage production of Show Boat. For evening performances (except for Sundays), Westchester opens at 6 p.m. for seating with dinner beginning at 6:15 p.m.; the show starts at 8 p.m.

We were pleasantly approached by our server who made recommendations about the meal choices, wine, and the upcharges of appetizers and special desserts. We opted for drinks and then our salads were served promptly. With some delay between, we received our meals (I had pretzel-encrusted boneless chicken with maple bourbon cream sauce and my husband had prime rib), and they were followed by Peach Melba, coffee and tea. Servers and bussers swiftly cleared the tables before the show began promptly at 8 p.m. 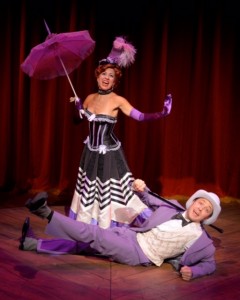 Show Boat, the 1927 spectacle which took Broadway by storm by blending genres – a musical with a serious play – was based on the novel by Edna Ferber. With music by Jerome Kern and book and lyrics by Oscar Hammerstein II, it is a story of the lives and loves of whites and blacks in times of racial tumult, set in and around the Cotton Blossom, a Mississippi River show boat. Spanning 40 years, it follows the performers, stagehands, and dock workers as they navigate through and attempt to transcend racial and social injustices.

With seating in the round, there isn’t a bad seat in the house. And from the opening scene, dawn on the Mississippi levee where the black stevedores and women work the docks, the audience is drawn in, virtually feeling the heat of the Mississippi sun. The initially serious tone ultimately breaks way to a comedic one when the show boat troupe, led by Captain Andy Hawks (Jamie Ross does a phenomenal job and is simultaneously endearing, engaging, and funny), introduces themselves to the passersby on the levee, encouraging them to return later for the Cotton Blossom’s evening performance. The dynamic troupe brings a jolt of colorful energy to the stage: Amanda Pulcini is effervescent and sidesplittingly funny as Ellie May Chipley whose voice is matched only by her skillful physical comedy; her partner, Frank Schultz (Daniel Scott Walton) is her comic counterpart/partner and steals many a scene. The show boat’s headliners, Julie Laverne and Steve Baker played by Sarah Hanlon and Eric Briarley respectively, are wonderful. As their personal story unfolds rife with racial discrimination, their love and loyalty to one another is heartfelt and authentic. 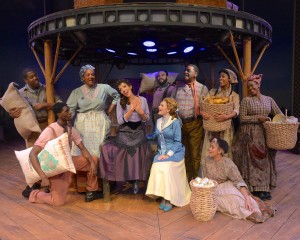 Enter handsome gambler Gaylord Ravenal (John Preator is clear and strong) and sweet, naïve Magnolia Hawks (the charming Lee Harrington, who recently replaced Bonnie Fraser), whose attraction is instantaneous and brought to life in the duet “Only Make Believe.” Both bring skilled voices to the roles and make the audience believe in love at first sight; a love which is palpable, deep, and unending, and around which the rest of the story is linked. Magnolia is the daughter of the Captain and the cantankerous Parthenia (Parthy), played with the perfect amount of shrill and petulance by Karen Murphy. Murphy’s Parthy is convincing in the lengths she goes to protect her daughter both from the life she desires on the stage as well as her rascal suitor Ravenal.

The entire moral hinge for Show Boat is the number “Ol’ Man River” sung masterfully by Michael James Leslie as Joe, once in Scene 1 in its entirety and in several more reprises. It is show-stopping each and every time. Joe is brilliant in his vocal proficiency and in his ability to pull in the audience. Joe’s wife and the ship’s cook, Queenie, radiantly played by Inga Ballard, keeps her husband in line, as well as the rest of the crew. The early number “Can’t Help Lovin’ Dat Man,” sung by Julie, Queenie, Magnolia, Joe and Ensemble, also is a show-stopper, beautiful, dramatic, and intense. 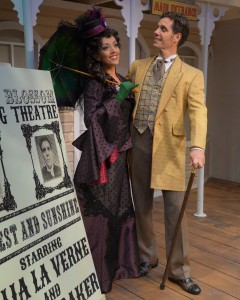 As we follow the ups and downs of the characters and their relationships, this layered show brings with it energy, romance, emotion, and drama. And as in life, even in the darkest of times, there is humor. The cast was superb.

Westchester’s Show Boat was directed by Richard Stafford who also was responsible for the vibrant, lively choreography. Ryan Edward Wise is credited with musical direction, orchestration, and dance arrangement. Shout outs to Michael Bottari and Ron Case for the beautiful staging and costume design; their moveable sets and use of rising pieces from trap doors beneath the stage made an onerous task look effortless in order to create the varied settings for the numerous scenes.

Overall, Show Boat was a rousing success. Westchester brought a classic to life and I look forward to their next performance!