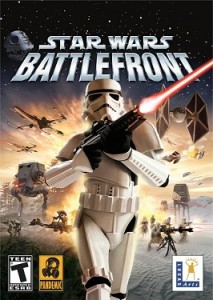 When looking back at the original Star Wars Battlefront for PC, PlayStation 2 and Xbox, a surge of memories come rushing back to me. Bringing with them the warm feeling of conquest through a galaxy a long time of ago. For some, the first good Star Wars game was The Knights of the Old Republic but for me, Star Wars Battlefront was love at first sight. This game not only brought FPS to a new light for the Star Wars gaming franchise, but it showed something that many people looked over during the movies. Jedi, Sith, and Bounty Hunters are not the only bad asses, the soldiers- whether they are droids or clones, storm troopers or rebels- they all can be significant and great heroes. Most fans like to be their favorite character from Obi-Wan to Darth Vader, but the game never gave people that option to the gamer. That’s okay though, because you got to explore the idea of being a simple soldier (certain class of character of course) and making your mark on the battlefield.

When looking at the Battlefront game, the transition from first person shooter to third person shooter based on the gamers choice at any time they wanted was something that many overlooked, but I appreciated. The small difference in classes were miniscule, but they’re significant enough to keep any gamer happy during any battle. My favorite clone class was the emp grenade launcher class because it was the only one that would make mincemeat of droideka shields but also that guy had a jetpack…JETPACK. For droids, it was the sniper class. He was a scrawny droid but no one laughed when I popped heads left and right. For most people with the rebels, everyone wanted to be a Wookie, but I enjoyed just being a simple foot soldier who would camp droids on Bespin and throw grenades constantly down hallways. Finally, with the empire, it was always a tough choice but you can’t deny the destructive force of the shock trooper.

The game was the first chapter of good Star Wars games for consoles and will always hold that accomplishment. The best quality I feel the game brought to the table was having more than one map per planet. I truly relished the fact that we got to see different terrain for places like Bespin or Hoth and having to explore them all during battles to figure out your best strategies within using the terrain.

However, this game did not come without flaws. There was a campaign, but I felt it was more like choosing individual missions than following a story. When looking at the way battles normally happened, you could typically do a lot of damage by just camping near medic and trashcan droids. Overall, it still was a good game; it just needed things to be worked out when it came to flow of the game modes. Furthermore, Galactic Conquest could have been a bit bigger if they were just to include a few more planets to work within.

This game will forever be known as a classic and for good reasons. I’m proud of all the hours I spent just destroying my enemies while immersing myself within the Star Wars environment that is known as Star Wars Battlefront (2004).