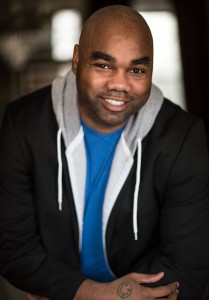 Someday Productions and Pillow Talking are proud to present this exclusive interview with Kevin Ray Johnson.  Kevin’s star is on the rise.  He is a true triple threat: actor, singer and playwright.  His play, The Unpredictable Times, recently was selected for a staged reading with Broadway actors.  A more detailed bio is included below.

Kevin, thank you for granting us this interview.

PT: When did you first discover you had an interest in theater?

KRJ: I would say I always had an interest in it. One of my mother’s famous stories she likes to tell people is how I used to quote The Wizard of Oz to people when I was a little kid. I remember also watching The Temptations movie and just wanting to be like them, especially Paul Williams. I also remember watching The Sound of Music with my sister and always thinking how cool I thought Rolfe (minus the whole Nazi thing) was when he sang to Liesl “Sixteen Going On Seventeen.”

My mom was the owner of a theatre company called Ms. Mary’s Playhouse. I remember when she directed Purlie and watching the actors rehearse the scene “First thing Monday Morning.” The stage was full of African American men with these huge baritone voices and it just blew me away. Even though I didn’t act on it until years later, it was the moment when I knew what I wanted to do when I grew up.

PT: What training have you received?

KRJ: I trained as a writer at Montgomery College in Rockville, MD as well as The Timberlake Playhouse playwriting colony; at the Artist Bloc in Washington, DC, and with Ken Wolf at The Manhattan Repertory Theatre. I’ve received wonderful advice from amazing artists along the way.

PT: In addition to playwright, you also are an actor. Where have you trained, what have you done and what are your favorite roles?

KRJ: I trained and was a Vocal Performance Major under Dr. Molly Donnelly at Montgomery College in Rockville, MD, at Studio Theatres Acting Conservatory, and I am a graduate of Signature Theatres (VA) overtures program in 2006. 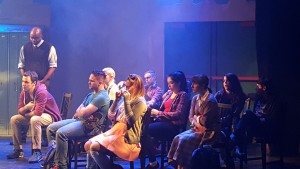 Kevin as Mr. Stephens in Carrie the Musical

PT: Who inspires you both personally and professionally?

KRJ: The person who inspires me personally, first and foremost I would have to say, is my mother who I feel sometimes is the only one who believes in me. Professionally I have a lot of inspirations but if I would narrow it down I guess it would be Lin Manuel-Miranda, Christopher Durang, Kurt Cobain, Dave Grohl, Kenny Leon, and Nick Blaemire just to name a few.

PT: What inspired your play? Was it your first attempt at playwriting?

KRJ: This was my second “big” project with my first being a one act played titled Life Inside an Open Kaije which was performed at The Capitol Fringe Festival in 2009. I wrote tons of small 5- and 10-minute plays before that. The Unpredictable Times was inspired by my life in Minnesota from the time I was 4 or 5 years old until I was 16 and it truly is what I call and consider my hometown. My childhood was filled with great memories and a lot of wonderful friends and people who I have stayed in touch with to this day. What inspired me to write this was just to get Champlin, MN recognized in some way. This piece is not based on my life but the characters do represent people that I knew while growing up in MN while at the same time each character represents me. I wanted to write something simple yet informative and inspiring while being very relatable; not just for my generation but for the generation before me and all the generations after. I wanted to write something that people walk away thinking “Wow I remember that time in my life;” and “Wow I know these characters or knew characters like this in my life.” I wanted to write something that reminds people of home, wherever that is for you.

PT: How long did it take you to write? Have you done many revisions? If so, what prompted them?

KRJ: I started writing the beginning drafts of this in late 2006 so it has been close to 10 years. There have been revisions but more along the lines of clearing up things and making it flow and make sense. Everyone who has helped me in the process has always liked the story and never tried to come in with a hidden agenda of trying to make it something they want or trying to leave their mark on the play. It’s always been with the mindset of what can make this play the best it can be. I would say since 2006 there would have been about a dozen revisions. When it is revised it’s more based on just making sure the motives and characters are clear over the story if that makes sense.

PT: What has the process been like? How did the play get to the point where it is?

KRJ: The process has been a rollercoaster while being a constant learning situation. Nothing ever stays the same but it’s always worthwhile in the end and definitely makes the show better! 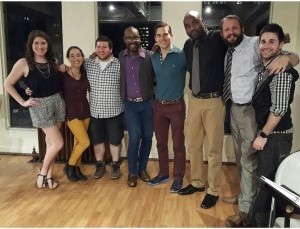 Kevin and the cast of The Unpredictable Times

PT: What issues/barriers have you faced?

PT: Who has supported you through the process?

KRJ: First and foremost my mother, along with the wonderful Samuel Eisenhuth who has played the role of “Carl” three times as well as help edit the script (my grammar is terrible) and most recently S. Lee Lewis who is the Producing Artistic Director at The Milburn Stone Theatre in Northeast Maryland. He has such a phenomenal vision of this piece and completely gets what I want with it. He has never said to me that won’t work which is the best gift you can give a young writer and he also respects the story.

PT: What are the nicest compliments and the worst criticisms you’ve received with regard to your play?

KRJ: I would say the best compliments I have gotten is just how relatable the characters are and how real and genuine the show is. One person in the recent reading told me how inspired they were and that just truly means the world to me. Also people always compliment how I write monologues which is so flattering.

PT: What are your goals for the play?

KRJ: To be honest, my goal is to see this show on a Broadway or Off Broadway stage. I feel it’s almost there.

PT: What do you consider your greatest successes thus far?

KRJ: I would say the most recent reading was the greatest success so far. I had an amazing cast that featured Matt Shingledecker who is currently playing “Fiyero” in Wicked on Broadway; Brian Charles Johnson who was in the original Broadway cast of Spring Awakening (as Otto) and American Idiot; as well as Nick Anastasia who reprised his role from the 2014 reading with Ashley Wool and Christy Wyatt (who will be playing Johanna in a regional production of Sweeney Todd pretty soon.) This cast was a dream. Honestly listening to them in the first read through in the first rehearsal was just so surreal and cool. 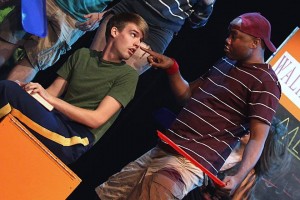 Kevin as a bully in The Love Note

PT: Is theater what brought you to NYC? How has that changed you both personally and professionally?

KRJ: Yes. I was cast in an Off Broadway musical called The Love Note in August of 2014 and that’s what made me return to New York after a three-year hiatus of performing regionally. Theatre in New York City is just top notch. Nothing against any regional circuits, because there are a lot of amazing regional theatre communities, but doing theatre in New York just makes you grow so much as a person and it’s always a learning experience.

PT: What is your favorite thing about NYC? Least favorite?

KRJ: My favorite thing about NYC is what’s about to come up which is the fall. My least is what’s leaving which is the summer. It’s too darn hot, lol!

PT: What have been your favorite plays (that you’ve seen)?

KRJ: My favorite play that I have seen in the last year is This Is Our Youth. It’s truly just the style of show that I like and it was just done so well. Small casts on a big Broadway stage sometimes don’t work but this cast made it work and it kind of was the driving force and inspiration to get my show up and going after like six readings of it in New York. 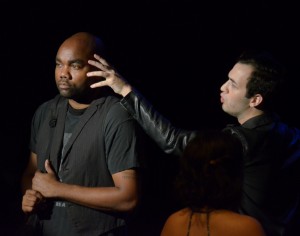 Kevin as Barton Howard in This Time

PT: Do  you have a favorite genre? A least favorite?

PT: Which playwrights do you most admire? If you could invite any three to dinner, who would they be? What questions would you ask them?

KRJ: My favorite playwrights would be Christopher Durang and Lin Manuel Miranda. I would ask them “What’s the advice you would give a young playwright?” “How do you respond to people who tell you that your show won’t work?” and the third would be “Why are you so amazing?” lol.

PT: If you could collaborate with any playwright, who would it be?

PT: If you could choose any actors to be cast in your play as well as any director, who would they be?

KRJ: Lee Lewis would be my director for sure (he has no choice in the matter, lol.) “Henry”and “Nicole” are tough to say but if I could choose the perfect supporting cast to surround the two leads it would be Brian Charles Johnson as “Carl,” a wonderful up-and-coming actress named Mallory Campbell as “Samantha,’ and Nick Anastasia as “Jake” (he’s done the last two NYC readings and completely embodies the role).

Kevin Ray Johnson is a working singer, actor, and playwright who currently resides in New York City. He just finished a successful run as Mr. Stephens in Carrie The Musical at the Westchester Sandbox Theatre.  Other NYC credits include: Merrily We Roll Along at Astoria Performing Arts Center (2015 NYIT Award for Outstanding Production of a Musical) and The Love Note (Original Off Broadway Cast, Actors Temple Theatre). Kevin is the playwright of The Unpredictable Times which recently performed an AEA 29 hour reading which featured Broadway performers Matt Shingledecker (Fiyero of Wicked) and Brian Charles Johnson  (OBC of American idiot and Spring Awakening) as well as Nick Anastasia, Christy Wyatt and Ashley Wool. For more information please visit – www.kevinrayjohnson.com .