Guest Theatre Review of THE BODY OF AN AMERICAN 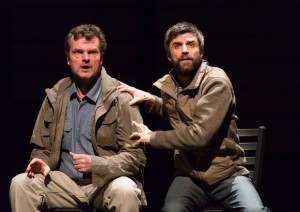 The Body of an American

Some may recall the shock at seeing Canadian photojournalist Paul Watson’s Pulitzer Prize-winning photograph of a dead American soldier who was dragged through the streets of Mogadishu in 1993; equally shocked by both the brutality of the photo’s content as well as in the publication of such a graphic image. Or one also may recall the controversy surrounding the 2001 war documentary Black Hawk Down which chronicled the ordeal that precipitated the desecration of William David Cleveland’s body, the soldier in Watson’s infamous photo. Most likely, however, one knows little about Watson, the man behind the camera, and the voice that continues to haunt him. “If you do this, I will own you forever,” Watson said he heard Cleveland say as he took the photo.

Playwright Dan O’Brien, himself plagued by “ghosts,” was intrigued by Watson’s story; he pursued Watson through emails and phone calls, attempting to befriend him and probe his psyche. O’Brien’s multi-award-winning play, The Body of an American, is less about the infamous photo than about Watson and what became of him, as well as O’Brien’s own introspection – the result is a 90-minute dialogue between Dan, portrayed by Michael Crane, and Tony Award-nominee Michael Cumpsty as Paul.

There virtually is no set with the exception of two chairs and a split-panel backdrop that serves as a screen on which images are projected (the screen unfortunately distorts the images). Set designer Richard Hoover’s sparse setting works, as it focuses all attention on Dan and Paul’s interactions, the emptiness of their lives, their regrets, and their desperation.

The characters constantly rearrange the chairs which adds movement to an otherwise static performance, and it brings a bit of much-needed comic relief in a scene which takes place in the Arctic, where the chairs become dogsleds.

Crane and Cumpsty are masterful in voicing their at-times confusing dialogue and monologues, as they exchange characters, one becoming the other (outside of himself); or when they adopt other roles such as passengers on a plane, Paul’s translator and guide, or even Mother Teresa. Crane’s Dan is alternately timid and persistent as the driving force in this relationship/friendship. Cumpsty portrays a despondent, disillusioned Paul.

Focused as The Body of an American is on the men themselves and the spirits that haunt them, O’Brien’s work deftly probes the underbelly of human motivation, memory, and guilt, leaving the audience ultimately to draw many of its own conclusions about the fates of these men.