Family Trip to the Bronx Zoo 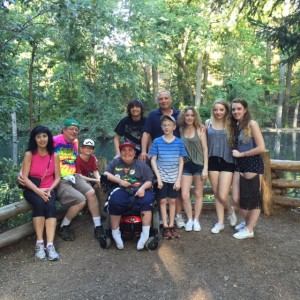 He  said:        I know I would be considered the worst type of Grinch if I said I didn’t like going to the zoo – so I am not going to say that. I will say that growing up in Yonkers – a hop, skip and a jump from the Bronx Zoo – and going to Fordham College (directly across the street from the zoo) the Bronx Zoo is more like going home than to a major tourist attraction. Indeed, it’s like when I go to work in Manhattan and I see the tourist buses filled with gawkers and wonder what is so interesting about the Empire State building. After all, I pass it every day.

Any sort of ambivalence about the zoo on my part also may be attributable to passing views that these animals should be in the wild rather than penned up behind glass and bars for our own amusement (yes, save your cards and letters – I realize there is an educational component as well). Although I must say that I thoroughly enjoyed going through the safari section of Great Adventure Six Flags and having monkeys jump all over your car and watching a live birth of a giraffe. There’s an element of danger being separated from wild animals by your car door and windshield. Then there was that time I saw in my rear view mirror that a monkey was running with a bunch of other monkeys with a strip of someone’s door molding hanging out of his mouth and flapping in the breeze. I laughed hysterically, telling my brave crew of safari companions that some poor slob lost his door molding – only to find that the poor slob was none other than myself!

Nevertheless, my kids love the Bronx Zoo and so does my fiancee’s children. So we loaded all six of our children (with the exception of my fourteen-year-old daughter who was going to a different kind of zoo – a stadium of pre-pubescent girls screaming over the band 5 Seconds of Summer) into our van and headed to the Bronx.   Fortunately, we had a family membership which covered all eight of us and which helped to mitigate some of the damages (although not all).

So we saw lazy polar bears and sea lions; a few roaming tigers, giraffes, lemurs and a lot of unidentified birds and fishes. The pink flamingos certainly stood out as did the Madagascar cockroaches. By far, the best exhibit (I hate even calling it that) were the gorillas. Apparently, a gazillion other people thought so too! I ended up having a claustrophobic attack and had to leave the remainder of my family crammed like sardines watching the baby gorillas that were out and about. Somehow we escaped the petting zoo (which would have eaten up a couple of hours), the monorail and shuttle. We couldn’t find the penguins. Although the zoo is, for the most part, handicap accessible (my oldest son has Duchenne muscular dystrophy and is in a wheelchair), some exhibits like the penguins have alternate routes through the parking lot and half the Bronx.

By far, the biggest attractions where we spent the most amount of time (and money) were the gift shops and food vendors. Let’s see – popcorn and Dippin’ Dots ice cream as appetizers followed by full lunches as entrees. Two trips to the gift shops for bric-a-brac that will sit on shelves and be more things that I’ll eventually have to dust. Let’s not forget about the airbrush tattoos that most of the kids got. Yeah, if truth be told, even I imagined what the tattoo of the phoenix would look like on my bicep. Luckily, it was a fleeting thought.

Not all of the “attractions” were behind the glass. The woman with blue hair seemed to get a lot of comments and looks from the crowd. And then there was this raging crowd of adults (like zombies from “The Walking Dead”) who almost mauled a little boy for climbing onto the gate and blocking a gorilla in a rare moment when the gorilla actually came up to the viewing glass and leaned on it. Another high point came on the way out when we asked a stranger to take a pic of all of us and he turns out to be a film director! Maybe we’ll review his film on our blog!

What counts, of course, is that the kids had a great time. Despite the aches and pains and the bone weariness I endured, I assured the kids that, like MacArthur, (or the Terminator) we would be back. All in all, it was a helluva day at sea (oops! Wrong travel blog) – I mean a helluva day at the zoo. 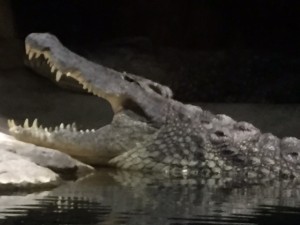 The Bronx Zoo practically saved my life a few years ago. Okay, I’m being overly dramatic; however, I’ve had more than a few bum summers in my life as a divorced, single mom of four. That being said, a family membership to the zoo is a great way to pass the months off from school and oppressive heat with no swimming pool, while staving off any meltdowns – you know, those which tend to occur out of sheer boredom when four kids are cooped up in a house with nothing to do. From our hometown, at under an hour’s drive, with a membership that includes all of the premium attractions (code word for extra dough) and parking, and being one of the few family amusement/activity parks that actually allows you to bring in your own food, it is definitely a bargain.

Fast forward to this summer – with two adults and seven kids it was even MORE of a bargain to snag ourselves a family membership. We actually SAVED somewhere around $125 than if we’d purchased individual tickets for one trip! And a year-long membership means we can go as many times as we want to, even bring a guest if we’d like, and also have admission into the Central Park Zoo, Queens Zoo, Prospect Park Zoo, and the New York Aquarium!

The bonus for our family is that we actually can go somewhere that no matter what your age, no matter what your ability, there is something for everyone to enjoy. With Wayne’s oldest son, Wyatt, who is wheelchair-bound, this is rarely the case. And while we didn’t check out the monorail, the entire park is handicapped accessible despite the natural landscaping and a few run-ins with stairs we had to re-route around.

Taking a large group such as ours anywhere can sometimes be a challenge: this child wants to go here; this one there. Another wants to explore every gift shop, while yet another has to see every square inch of the venue. The Bronx Zoo is no exception. But we manage – as we always do.

The best part of the Bronx Zoo is no doubt the animals. I feel like a big kid myself and really do revel in the beauty of these creatures up close and personal. And my personal favorite place, the place where I could practically spend the day, is in the Congo Gorilla Forest. I just love them. Then again, I do love all primates of every kind. I’m a dork. I talk to them through the glass. I want to take one home. But since I’m not looking to be arrested, I resist that urge. This summer there were three babies and watching them and all there antics was the highlight for me.

After a day at the Bronx Zoo, in addition to my visual fill from seeing all of the animals, I also feel physically great. Walking (or in Wyatt’s case, driving) through the zoo is a requirement. But there are few if any hills and the areas are mostly shaded. We went on an 80-degree day and were very comfortable. I always love to check the Health app on my iPhone afterward to see how far I’ve walked.

Of course if you choose to eat there, the biggest expense can be the food. I have to say it’s reasonable, however, more reasonable than your average amusement park. And overall it’s pretty decent with some healthier choices in addition to the regular hot dog, burger, and French fry fare. My son had pizza and ranked it among his favorites (I’d have to agree it was pretty darn good; I ate his crust after I decided I’d be good and have a chicken Caesar salad.)

Depending on your self-control, the gift shop is the next purse drain. The prices are not bad and the items also are pretty nice and varied, but when you have as many kids as we do, limiting these purchases is a necessity. Even the temporary “zoo tattoos” were nearly bargain at $5 each. They last seven days and four out of our group went with them (placement aided by my almost 19-year-old who has some real ink of her own.)

I have no complaints with the Bronx Zoo. I’ve lost count of how many times I’ve been but I enjoy it each trip and so do the kids – all nine! We are looking forward to at least a few more visits, and although our children might be a bit too old for their upcoming “Boo at the Zoo,” we hope to take in the Holiday Lights Festival at the end of the year.