Who knows what happens behind closed doors much less the now past lives of those buried beneath engraved tombstones? Ever stand in the middle of a cemetery and wonder what were their lives really like when they were alive? Were they happy? sad? rich? poor? Did they face the same or similar problems that we who still walk among the living share?  This new poem by our Guest Blogger Ignacio M. Nosferatu tries to frame these thoughts. 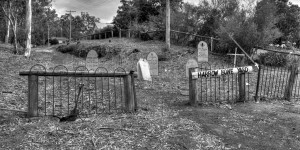 BELOVED SON – TAKEN FROM US TOO SOON

Ha! A junkie and thief was he who

Drove his parents to divorce and despair

A notorious panderer, philanderer and adulterer

The moniker could have been bestowed earlier

Were it not for the abortion at sixteen

Who was a raging, abusive alcoholic to everyone around him

An incompatible, loveless, fruitless union, coupled only in inaction and denial

She could no longer endure

AND best for last

In name only, an egg donor, no patience or love to give, wire hanger strict

In Dante’s most frigid level of Hell

But rather the Idiotic mendacity buried beneath.

NB: Many thanks to Wayne J. Keeley who collaborated on the piece which was originally published by Scarlet Leaf Review